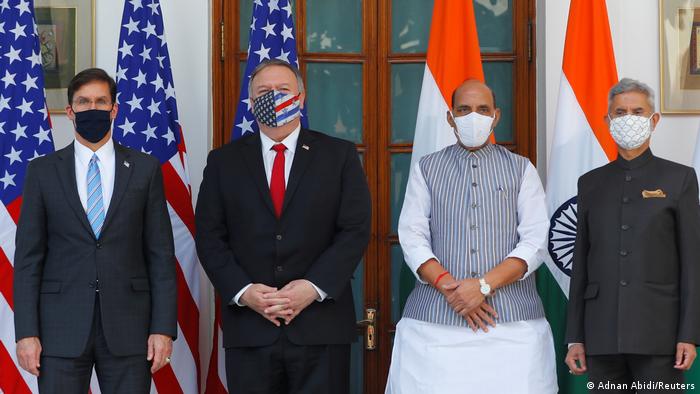 India signed a defense agreement with the United States for sharing of sensitive satellite data on Tuesday, as the two sides held a top-level security dialogue aimed at countering China's growing clout in the Indo-Pacific region.

"The United States will stand with the people of India as they confront threats to their freedom and sovereignty.'' Pompeo said, citing a Chinese state he called "no friend to democracy, the rule of law, transparency, nor to freedom of navigation, the foundation of a free and open and prosperous Indo-Pacific."

Ahead of the talks on Tuesday, Esper met Singh and the two men discussed the Basic Exchange and Cooperation Agreement on Geospatial Cooperation that is ready for signing, the Indian Defense Ministry said.

"The two ministers expressed satisfaction that agreement of BECA will be signed during the visit," the ministry said in a statement.

"We agree that the U.S.-India Comprehensive Global Strategic Partnership is critical to the security and prosperity of both our countries, the Indo-Pacific region, and the world," Pompeo tweeted earlier on Monday.

The accord would provide India with access to a range of topographical, nautical and aeronautical data that is considered vital for targeting of missiles and armed drones.

It would also allow the US to provide advanced navigational aids and avionics on US-supplied aircraft to India, an Indian defense source told Reuters.

The deal comes at a time of strained ties between India and China, with both countries' militaries engaged in a standoff near the disputed Himalayan border.

Washington, for its part, has also ramped the diplomatic pressure on China, as ties worsen over a range of issues from Beijing's handling of the coronavirus to its imposition of a new security law in Hong Kong and ambitions in the South China Sea, among other problems.

Pompeo will go on from India to Sri Lanka, the Maldives and Indonesia, all of which have a key role in Indian Ocean maritime traffic where China has cast a greater shadow.