The House of Representatives voted on stripping controversial Republican congresswoman Marjorie Taylor Greene of her committee assignments. Before her election, Greene had espoused incendiary and anti-Semitic rhetoric. 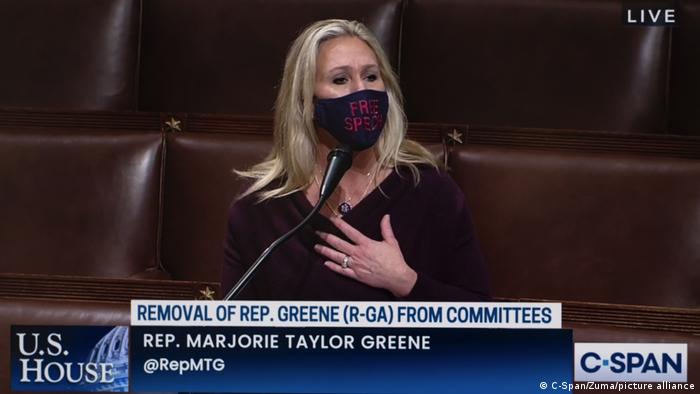 The Democratic-majority House of Representatives on Thursday voted to remove controversial congresswoman Marjorie Taylor Greene from her committee assignments in the chamber.

Greene, a Republican who represents a conservative congressional district in northern Georgia, has peddled the QAnon conspiracy theory and used violent rhetoric towards Democratic leaders such as House Speaker Nancy Pelosi.

The most contentious material hails from before her time as a Congresswoman, albeit also from the rather recent past.

Removed from education and labor and budget committees

"No member ought to be permitted to engage in the kind of behavior that Representative Greene has and face zero consequences," Democrat House Majority Leader Steny Hoyer told the chamber. "This vote can be a first step in correcting the error of those who so far have chosen to do nothing."

Republicans criticized the vote with members of leadership warning of possible political payback should they regain power.

"This vote today sets a dangerous precedent for this institution that Democrats may regret when Republicans regain the majority," said Republican Liz Cheney. Cheney said that while Greene's comments were deplorable, Democrats "have no business determining which Republicans sit on committees."

Committees in the US Congress are designed to be bipartisan no matter who is in office, with each party typically choosing who to assign to which positions.

What did Greene say?

Shortly before the vote, 46-year-old Greene addressed the House floor wearing a mask emblazoned with the words "FREE SPEECH." She apologized for some of her most contentious past comments — for instance saying that school shooting were staged hoaxes, or that no planes had hit the World Trade Center in New York on September 11, 2001.

"These were words of the past, and these things... do not represent my values," she said. "I was allowed to believe things that weren't true and I would ask questions about them and talk about them. And that is absolutely what I regret."

"You see, school shootings are absolutely real. And every child that is lost, those families mourn it. I also want to tell you, 9/11 absolutely happened. I remember that day, crying all along, watching it on the news," Greene said.

Greene did not apologize for seeming to endorse calls for political violence against Democrats. Greene had "liked" Facebook posts that endorsed the execution of Democrats including House Speaker Nancy Pelosi, before her congress bid. 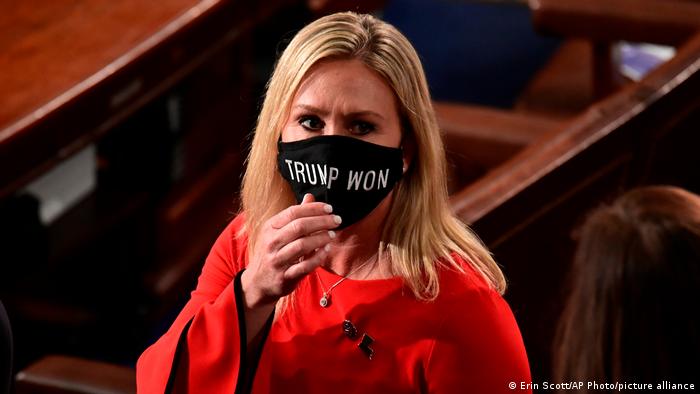 Skeptical of coronavirus precautions, Greene has taken to wearing masks with political messages: she wore this one when taking her oath of office last month

In 2018, Greene suggested that a "space laser" — controlled by a Jewish family —  was used to deliberately ignite a California wildfire.

She also put her weight behind several conspiracy theories, including the "QAnon" one which says that elite politicians and particularly Democrats are part of a coterie of Satan-worshipping cannibals and pedophiles.

"When I started finding misinformation, lies, things that were not true in these QAnon posts, I stopped believing it," Greene told the House.

In a bid to convince more Republicans to vote with the motion, Hoyer at one point walked past their ranks, holding up a campaign photo showing Greene brandishing an assault rifle next to images of three prominent House Democrats  —  Alexandria Ocasio-Cortez, Rashida Tlaib and Ilhan Omar.

"None of us should take any pleasure in what we must do today," Hoyer said just before the vote. "But to do nothing would be an abdication of our moral responsibility to our colleagues, to the House, to our values, to the truth, and to our country."

Republican Identity Crisis: GOP ‘would rather pander to crazy than say facts’

Republican Identity Crisis: GOP ‘would rather pander to crazy than say facts’

Democrats are seeking to make Greene the less-than-flattering face of the Republican Party ahead of the 2022 midterms, tying her to vulnerable House Republicans in television ads.

"Marjorie Taylor Greene shows that the Republican Party is still Trump's party and that's a party that has lost races across the country and will continue to lose," David Bergstein, the director of battleground states communications at the Democratic National Committee recently told The Hill, a Washington D.C.-based news outlet.  Greene, an enthusiastic supporter of former President Donald Trump, refuses to say whether he lost the November election against Joe Biden.

Republican National Committee Chairwoman Ronna McDaniel has called previous social media posts from Greene "disgusting” and said there would be an investigation into the controversial congresswoman. At the same time, McDaniel has said she would not intervene to prevent Greene from being re-elected.

"I trust the voters," McDaniel told The New York Times last week. "I have a lot of faith in the voters to pick who's best to represent them."

More and more people seem ready to believe theories that not so long ago would have been dismissed as sheer nonsense. This isn't just a strange, laughable phenomenon — it's dangerous for democracy, says Martin Muno.

The bizarre QAnon conspiracy theory has gained traction among US Republicans during the campaign. With the Democratic candidate dropping out, QAnon supporter Marjorie Taylor Greene seems set to win the Georgia district.