More and more people seem ready to believe theories that not so long ago would have been dismissed as sheer nonsense. This isn't just a strange, laughable phenomenon — it's dangerous for democracy, says Martin Muno. 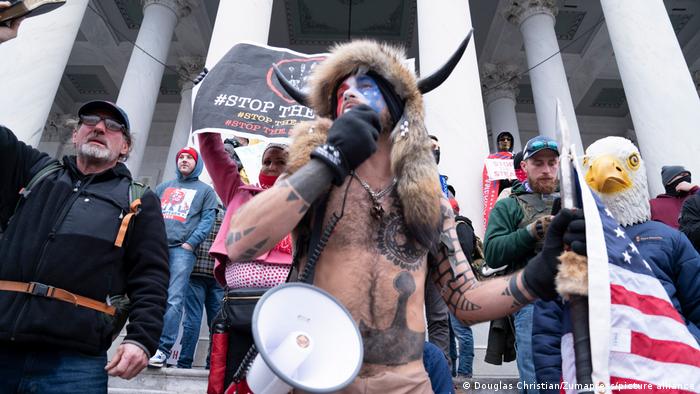 If, just a few years ago, someone had stated in public that a global elite was kidnapping children and torturing them to harvest their blood to make an elixir of youth, they would have been directed to the nearest psychiatric ward. Yet according to a British poll, some 10% of US citizens say they believe in at least some elements of this absurd theory known as QAnon.

The conspiracy theory has also been doing the rounds in Germany and, according to the Amadeu Antonio Foundation, which sets out to combat far-right ideologies and racism, it has already attracted some 150,000 supporters. This makes the German QAnon community the largest outside of the English-speaking realm.

A Konrad Adenauer Foundation study conducted from October 2019 to February 2020 found that around a third of Germans were open to conspiracy theories. Not counting children under 14, that's 24 million people. Other polls support this figure, and have found many links between QAnon supporters, COVID-19 deniers and right-wing extremists.

How can such blatant nonsense resonate in an enlightened world? After all, this is the 21st century, not the Middle Ages. The answer is: It's just all a mouse click away. Social networks are the perfect breeding ground for fake news and conspiracy theories.

A study conducted in Germany by Correctiv, which describes itself as a nonprofit investigative newsroom, concluded that Facebook and YouTube were the platforms on which the most false information was spread, with messaging services such as Telegram and WhatsApp not far behind. Researchers at the Massachusetts Institute of Technology found that it took six times longer to reach 1,500 people with real news than with fake news.

Social media platforms are in a predicament. On the one hand, they have tended to defend a very broad concept of free speech and tolerate content that amounts to fake news, profanity and insults. It was only in October 2020 that Facebook agreed to take down "content that denies or distorts the Holocaust." Holocaust denial has long been considered a crime in many countries.

On the other hand, these platforms are beginning to admit that the rapid spread of fake news and hatred facilitated by their platforms poses a danger — as shown by the storming of the US Capitol last month.

In response to this wake-up call, some platforms are beginning to hold users to account and have blocked the accounts of prominent and less prominent people. Some also now flag fake news with a warning.

But this isn't enough. Facebook and the rest must also be made liable for content such as fake news and hate speech posted on their platforms. The European Commission has tried to address this with its Digital Services Act but faces the difficulty of navigating the thin line between curbing the spread of fake news and censorship.

Not only that — media competence must also be taught more in schools. Young people are more likely to gain their information from social media than traditional news outlets, which need to develop formats better suited to reaching the "YouTube generation."

These are urgent, crucial changes. Conspiracy theories must be resisted because they harbor the potential to destroy democracies, as witnessed not so long ago in Washington.

Last week, in her speech to the German Bundestag on International Holocaust Day, the activist and politician Marina Weisband made it clear: "Being Jewish in Germany means understanding that [the Holocaust] did happen, and that it could happen again. It means that anti-Semitism doesn't start when somebody shoots at a synagogue. That the Shoah did not begin with the gas chambers. It starts with conspiracy narratives."

Russia to send nuclear-capable missiles to Belarus 3h ago

Opinion: Climate justice must be more than a promise 19h ago