US evangelist Billy Graham dies at 99

The Baptist preacher who counseled presidents and spoke about the Bible to hundreds of millions has passed away in his native North Carolina. Conservative politicians paid tribute to Graham online. 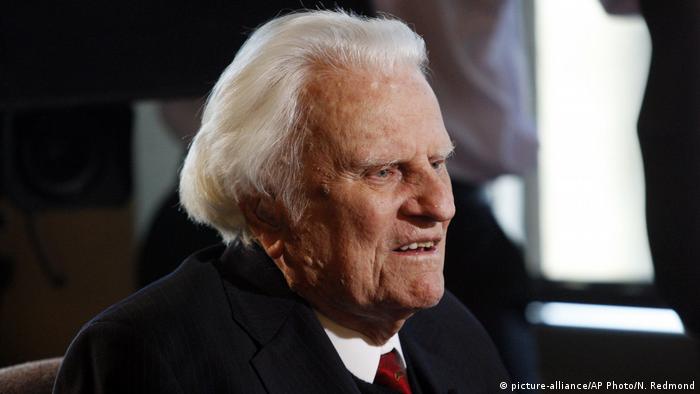 Evangelist Billy Graham has died at the age of 99, a spokesman confirmed on Wednesday. According to the Billy Graham Evangelistic Association, he preached to more people than anyone else in history during his 70 years on the pulpit.

A pioneer of televangelism as far back as the 1950s, Graham reached hundreds of millions of Christians in his televised speeches. With his messages of redemption and salvation through the bible, Graham was extremely popular with leading political figures — meeting with every occupant of the White House from President Harry Truman to Barack Obama, including the Catholic John F. Kennedy.

He also met with Queen Elizabeth II during a trip to London in the 1960s, and famously counseled President Richard Nixon around the time of the Watergate Scandal. Former Secretary of State Hillary Clinton has also said she sought Graham's help while dealing with her husband's infidelity.

Born on November 7, 1918, Graham became interested in preaching after listening to an evangelist in his North Carolina hometown of Charlotte when he was 16. A few years later he decided he too wanted to be a preacher, and began speaking at revival meetings around the US.

"The GREAT Billy Graham is dead....He will be missed by Christians and all religions. A very special man," Trump wrote on Twitter.

Catholic Cardinal Timothy Dolan also joined the chorus of mourning for Graham, saying "anyone growing up in the 1950s and 1960s can tell you, it was hard not to notice and be impressed by the Reverend Billy Graham."

'If I had to do it again, I'd avoid partisan politics'

He preached a conservative, but not fundamentalist, version of Christianity rooted in Baptist theology. In earlier decades, Graham spoke out about political causes he believed in such as anti-communism efforts, and even called Vietnam War protesters attention-seekers. While he did not actively campaign for racial equality, he did refuse to speak at meetings segregated by color. In later years, he also made it clear he was against same-sex marriage.

He was forced to apologize in 2002 after tapes of his conversations with Richard Nixon were leaked. In the recordings, Graham can be heard agreeing with Nixon that liberal Jews controlled the news media, saying that the Jewish "stranglehold has got to be broken or the country's going down the drain."

In the last decades of his life, Graham withdrew from speaking out on current events, focusing on the simple, Bible-centric message that made him famous.

"If I had to do it over again, I would also avoid any semblance of involvement in partisan politics. An evangelist is called to do one thing, and one thing only: to proclaim the Gospel," Graham wrote in his 1997 autobiography "Just As I Am."

Protestantism is mostly a group of niche movements in predominantly Catholic Latin America. The 500th anniversary of the Reformation is an opportunity for Christianity's various sects to find new recognition. (29.10.2017)

When he pinned his 95 theses to the door of the church in Wittenberg 500 years ago, Martin Luther didn't just spark a church reformation, but a global movement. An exhibition in Berlin examines his wider impact. (11.04.2017)