The former US president has requested that a judge force the social media giant to restore his account. Several platforms banned Donald Trump after his supporters stormed the US Capitol building in January. 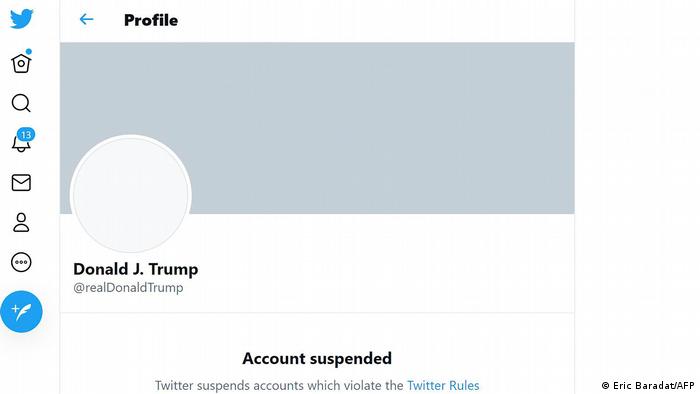 Trump was banned from Twitter on January 8, two days after his supporters broke into the US Capitol building

Former US President Donald Trump asked a Florida judge on Friday to force the social media platform Twitter to restore his account.

The company banned the then-president following the deadly riot at the US Capitol on January 6.

Trump filed his request for an injunction against Twitter in the US District Court for the Southern District Florida, close to his Mar-a-Lago home.

The filing argued that the social media giant had been "coerced by members of the United States Congress."

Twitter "exercises a degree of power and control over political discourse in this country that is immeasurable, historically unprecedented, and profoundly dangerous to open democratic debate," Trump's lawyers added.

The filing also pointed to the fact that the Taliban have been allowed to tweet about their victories in Afghanistan.

Trump was banned from Twitter on January 8 for violating the platform's policy against the "glorification of violence."

The move came two days after supporters of the right-wing president stormed the building housing the US Congress and Senate in Washington.

At the time of his banning, the ex-president had 88 million followers. There had been growing pressure on social media companies to limit or ban the president after he had used his massive platform to promote conspiracies and far-right extremist ideas.

Twitter began posting warnings of "misleading information" under his tweets after Trump refused to accept his loss in the presidential elections in November 2020.

The 75-year-old former president has kept a relatively low profile since leaving office, partly because he has been cut off from his preferred means of communication.

The question of whether he will run for the presidency again in 2024 remains open.