US defense giants Raytheon and United Technologies to merge

The deal has been met with skepticism in Washington. The two companies say it will create jobs and reduce costs for the government. 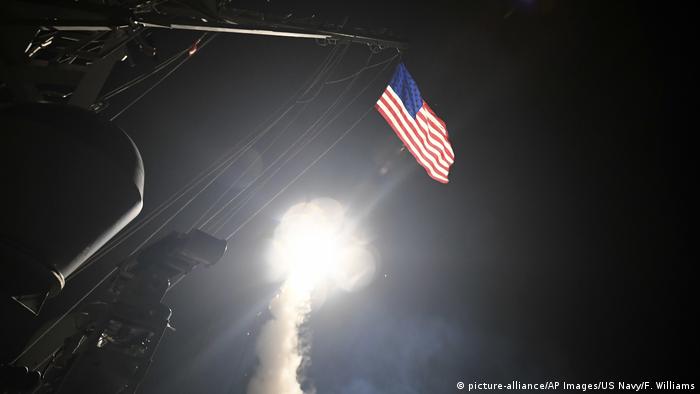 The maker of Tomahawk and Patriot missile systems, Raytheon, is to merge with aerospace industrial concern United Technologies Corporation (UTC) to take advantage of the strong global demand for fighter jets and munitions.

In the all-stock deal, United left its Carrier air conditioning business and Otis elevator division out of the agreement. This means the value it brings to the agreement is about $60 billion (€53 billion), close to Raytheon's market capitalization of $52 billion.

United Technologies has moved its focus to its aerospace business through its 2018 $23 billion acquisition of Rockwell Collins and the Pratt & Whitney engines business.

Businesses and government not on the same page

The two organizations said it would be a "merger of equals" and it would boost development, while saving the US government money.

President Donald Trump was less convinced, though, stating he was "concerned" about the deal.

Trump said: "When I hear they're merging, does that take away more competition? It becomes one big, fat beautiful company but I have to negotiate, meaning the United States has to buy things and does that make it less competitive? It's already non-competitive."

UTC Chief Executive Gregory Hayes wanted to alleviate the president's concerns. He said: "Once he understands the benefits of this merger and what it is going to do to reduce the costs of the government and what it's going to do for jobs in this country, I think he's going be supportive."

Raytheon is best known for its Patriot air defense systems, which acquired notoriety during the Gulf War, and its Tomahawk cruise missiles, the long-range weapon that is used by the US Navy.

UTC is in the aeronautics industry and has the F-35 stealth fighter among its fleet, considered one of the most advanced combat aircraft in the world.

The move sends a signal that the US is serious about cutting its NATO ally off from the advanced fighter jet over Turkey's planned purchase of Russia's S-400 missile system. (01.04.2019)

US sets Turkey deadline to give up Russian missile deal

Turkey has until July 31 to "unwind" a deal to buy an S-400 missile defense system from Russia, the US has warned. The ongoing dispute between the two NATO allies could reach breaking point. (07.06.2019)

GLOBAL IDEAS interview with C. B. Bhattacharya at the SBRT, Berlin