Authorities are investigating after one person was shot dead. It is at least the second shooting incident during almost a month of protests in the city of Louisville. 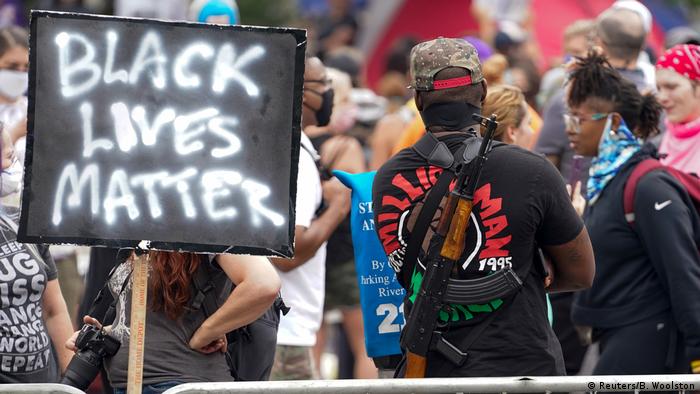 One person has died and another person was injured on Saturday night during a shooting at a Black Lives Matter protest in the US state of Kentucky.

Tyler Charles Gerth died of a gunshot wound, according to the Jefferson County Coroner's Office.

The 27-year-old was a Louisville photographer who had become a vocal supporter of ongoing protests against racism and police brutality, reported the Courier Journal.

Social media video appeared to show one man shooting into the park as people ran for cover, before showing at least one person bleeding heavily on the ground.

No information about arrests or possible suspects was released.

Police said they were called to the rally at the Jefferson Square Park in the center of Louisville — Kentucky's largest city — at about 9.00 p.m. (0100 GMT/UTC).

"Calls then came in that Sheriff's Department personnel were in the park performing life-saving measures on a male who eventually died at the scene," the department said on Twitter.

Shortly afterwards another person was shot nearby. They were hospitalized with non-life-threatening injuries.

Protesters have gathered for weeks at the square over the killing of Breonna Taylor, a 26-year-old African-American emergency medical technician who was fatally shot by drug investigators during a no-knock raid on her home.

Louisville Mayor Greg Fischer said he was "deeply saddened by the violence."

"It is a tragedy that this area of peaceful protest is now a crime scene," Fischer said in a tweet.

Several dozen people gathered on Sunday at the park. A few police officers handed out flyers that said overnight camping and cooking at the site is banned, but protesters will be allowed to continue gathering during the day.

Police removed tents from the site and told protesters they could pick them up at a separate location.

Saturday's shooting is at least the second such incident during nearly a month of protests in Louisville over Taylor's death. On May 28, seven people were wounded when gunfire erupted near City Hall.

The US House of Representatives has approved a sweeping Democratic bill on police reform. Lawmakers passed the legislation largely along party lines, and the bill faces opposition when it reaches the Senate. (26.06.2020)