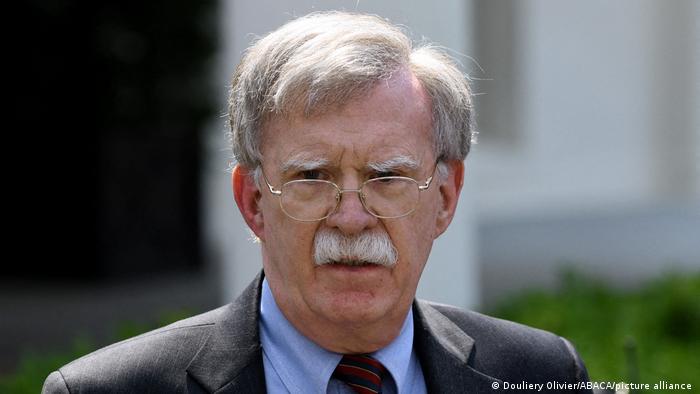 The US Justice Department said on Wednesday that it uncovered a "plot" to kill former US national security adviser John Bolton.

The department announced charges against Shahram Poursafi, identified as a member of Iran's Revolutionary Guard. According to an FBI affidavit, Poursafi offered $300,000 (€290,500) to yet unidentified individuals in Maryland and Washington DC to carry out the killing.

What was the alleged plot?

According to court documents, Poursafi asked an unidentified US resident whom he had met online to take photos of Bolton. The individual then referred Poursafi to an associate, referred to in court documents as "confidential human resource" (CHS). Poursafi offered the CHS $250,000 to hire someone to "eliminate" the official, which was then negotiated up to $300,000.

According to prosecutors, Poursafi attempted to arrange the assassination starting in October 2021.

CHS requested an initial payment before the assassination could be carried out. Poursafi sent the ostensible assassin $100 worth of cryptocurrency late in April 2022.

What is the suspected connection to Soleimani's death?

Prosecutors say the plan to "eliminate" Bolton was likely devised in retaliation to the death of Qassem Soleimani, who was killed in a targeted US air strike after he landed at Baghdad's international airport in early 2020.

Soleimani was the head of the Quds Force of Iran's Revolutionary Guard and a major figure in Iran's military involvement in Syria, Lebanon and Iraq. Iran vowed revenge following the general's death.

According to the US Justice Department, Poursafi expressed "regret that the murder would not be conducted by the anniversary of Qassem Soleimani's death."

What was the response from Iran?

Hours after the US Justice Department disclosed its findings on the alleged plot, Iran slammed the accusations as politically motivated.

"Iran strongly warns against any action against Iranian citizens under the pretext of these ridiculous and baseless accusations," Foreign Ministry Spokesman Nasser Kanaani said, according to Iranian media.

What is Bolton's stance towards the Iranian regime?

The former security advisor is known for his belligerent stance towards Iran, and has repeatedly called for the US to attack the country. In a 2021 interview with DW, Bolton reiterated his support for the fall of the Iranian regime.

Bolton had left his White House post by the time of the Soleimani killing in January 2020, reportedly because his stance on Iran was too aggressive for Donald Trump. However, commenting on the news of the strike against the Iranian general, Bolton tweeted "hope this is the first step to regime change in Tehran."

The US has claimed that Tehran is looking to kill one or more US officials in retaliation to Soleimani's death. Former Secretary of State Mike Pompeo is also believed to be a target.

Bolton and Pompeo were both among dozens of US officials sanctioned by Iran last month.