A first group of 90 Syrian fighters have begun training with US troops in Jordan. The Pentagon forecasts it will take three years to train and arm thousands of moderate Syrian forces. 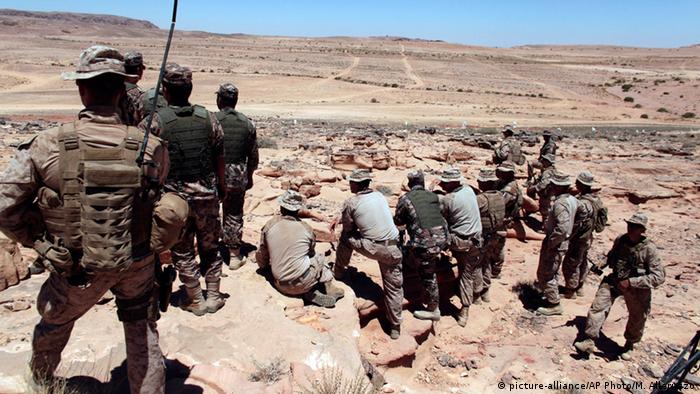 A spokesman for the government of Jordan said military training for the first group of 90 Syrians began several days ago.

About 350 of the 450 coalition forces involved in conducting the training are US troops. The training is being carried out at four sites in Jordan, Saudi Arabia, Qatar and Turkey. Turkish officials have said that instruction would start there this weekend.

"Jordan confirms that the war against terrorism is our war, and it's the war of the Muslims and Arabs, first and foremost, to protect our interests and the security of our countries, peoples and the future of our children, and to defend our tolerant religion," Jordanian government spokesman Mohammed Momani said on Thursday.

US Defense Secretary Ash Carter said the US was training the rebel troops to fight against militants with the self declared "Islamic State," (IS) and would support the fighters it trains with surveillance or airstrikes once they returned to the battlefield.

The Pentagon has said it will take three years to train and arm more than 15,000 opposition forces. "We're starting with the people that we have that we've vetted very carefully," Carter told a Pentagon news briefing on Thursday. More than 3,750 Syrian fighters have volunteered for the training, and about 400 have completed the prescreening.

The rebel fighters come from several moderate groups in Syria. They will be given training on basic military equipment and skills, including firearms, communications and command and control abilities.

Carter said the danger to US and coalition trainers was limited: "First of all, these are highly vetted individuals. That's an important part of the program. Second, the training takes place in a secure location. And third, of course, our people who are participating in the training are very experienced in this kind of training, including in security procedures."

Carter described the training program as a critical and complex part of the campaign to defeat IS. The US military has led an international coalition force for airstrikes against IS in Iraq since August. It extended the campaign into Syria in September.

US Congress passed legislation authorizing the military to arm and train moderate Syrian rebels, and approved $500 million (444 million euros) for training about 5,000 fighters over the next year.

Some Syrian rebel groups and members of the US Congress have expressed doubts about the program, saying it is too small and too slow.

Assad acknowledges 'setbacks' in the fight against rebels

Syrian president Assad said that "ups and downs" are normal in a war, following a string of defeats suffered by the government forces. Assad also dismissed reports that his troops are in trouble as "propaganda." (06.05.2015)

Christians, Kurds join forces against 'IS'

In the Syrian town of Tel Tamer, life has been set on hold. Buildings stand empty and the people who used to live here have gone. In their place rebel fighters try to stop "IS" advances. Hannah Lucinda Smith reports. (05.05.2015)