The US army is investigating a coronavirus outbreak at one of its bases in Bavaria, where a young woman faces charges for visiting local bars despite showing symptoms. The hotel she worked at was forced to close. 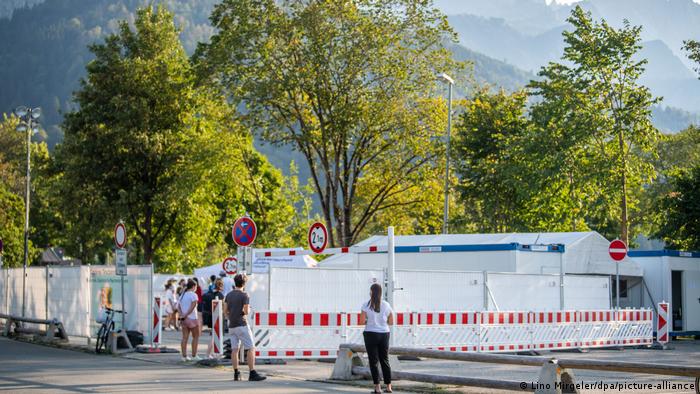 A spokesman for the US military in Bavaria on Thursday confirmed it was carrying out its own investigation into a 26-year-old woman suspected of flouting coronavirus and already facing charges from local prosecutors.

The woman, a US national, works at the Edelweiss Lodge and Resort in the picturesque Alpine town of Garmisch-Partenkirchen, situated at the foot of Germany's tallest mountain, the Zugspitze.

Local authorities say there have now been 25 cases of coronavirus cases among staff at the lodge and resort, which caters exclusively to US military personnel.

The woman also faces charges after it emerged that she visited a number of bars in the area despite showing symptoms and awaiting the outcome of a COVID-19 test, which was ultimately positive.

Bavarian state premier Markus Söder has called the events surrounding the outbreak "a model case of stupidity," adding that "such recklessness must have consequences." It's believed the woman may face a hefty fine.

Prosecutors in Munich say they are investigating the woman on suspicion of causing physical injury through negligence.

Alongside testing at the resort facility, hundreds of locals who were thought to have possibly been in contact with the woman were also given tests. However, a worst-case case scenario appears to have been avoided, with only three further cases identified — one person who worked in a bar she visited, the other two being pub customers.

The outbreak has resulted in a 10 p.m. curfew on bars and restaurants, along with a rule that no more than five people can gather in public. Some 59 people in the town, including the 25 cases at the resort, have recently tested positive for the virus, but the chain of infection remains unclear.

The Edelweiss Resort and Lodge has been forced to shut down completely for two weeks.

The US Army in Bavaria said any breach of military or local coronavirus regulations "would not be in keeping with our conduct and efforts to keep our communities safe.''

"We are currently gathering the facts associated with this incident, as are our Bavarian hosts," a spokesman said.

Nutrition expert Barry Popkin explains why obesity can have fatal implications in severe cases of COVID-19, making it harder to fight the disease.

The European Medicines Agency has said it would support vaccines that specifically target the omicron variant. Austria has come one step closer to a vaccine mandate. Follow DW for the latest global coronavirus news.