US and EU countries ignore torture in Uzbekistan, Amnesty claims

Many Western governments turn 'a blind eye' to abuses in Uzbekistan, putting their political or security interests first, Amnesty International has said in a report. Berlin has close military ties with the Asian country. 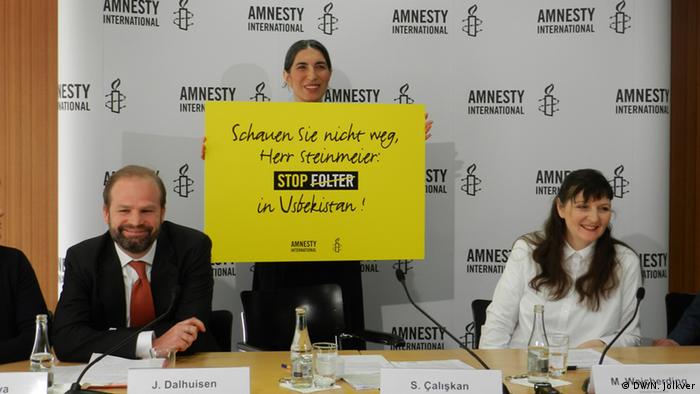 “It's an open secret that anyone who falls out of favor with the authorities can be detained and tortured in Uzbekistan. No one can escape the tendrils of the state,” said John Dalhuisen, Amnesty International's Europe and Central Asia Director, launching the report in Berlin.

The document claims that "rampant torture and other ill-treatment play a central role in the country's justice system and the government's clampdown on any group perceived as a threat to national security."

The human rights watchdog bases its findings on some 60 interviews conducted with witnesses over the last two years. Their report lists "horrific techniques" used by the police, including asphyxiation, rape, electric shocks, and deprivation of sleep, food and water.

The victims targeted by torture are anti-regime activists, religious groups, migrants workers and businesspeople, according to the London-based watchdog.

The US and European governments let their "geostrategic and business interests overshadow human rights abuses," the report claims, and say little about the situation in the Central Asian country.

"What is shameful is that many governments, including the USA, are turning a blind eye to appalling torture, seemingly for fear of upsetting an ally in the 'war on terror,'" Dalhuisen said.

"Other governments, like Germany, appear to be more concerned with business opportunities and not rocking the boat," the Amnesty official added.

Amnesty also points out that the last time EU foreign ministers put Uzbekistan's human rights abuses on the agenda was in October 2010.

"The USA, Germany, and the EU should immediately demand that Uzbekistan clean up its act and stop torture,” said John Dalhuisen.

The German Bundeswehr military uses an Uzbek airport for its Afghanistan mission, currently paying 35 million euros ($37.3 million) per year for the service. The former Soviet republic will demand over 70 million for the next year, according to German news magazine Spiegel.

The German government rejected the accusation of tolerating torture in Uzbekistan. A spokeswoman for the German foreign ministry told reporters in Berlin that it was both "self-evident and clear" that alleged human rights abuses "in all the countries around the globe are discussed appropriately… on many different levels."

In a new report titled "Death in Slow Motion," human rights group Amnesty International says the "suffocating crackdown against Afghanistan's female population is increasing day by day." The most visible part of this crackdown is in Afghanistan's schools.