The Uruguayan Football Association has announced that it will appeal a FIFA suspension for Luis Suarez after he bit an opponent. Uruguay's star striker was banned for four months and nine international games. 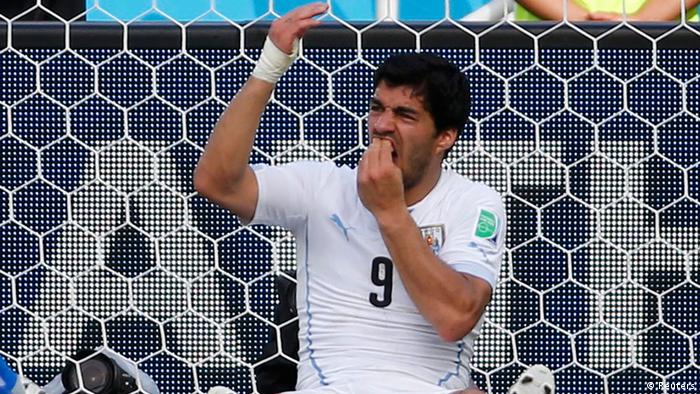 Uruguayan Football Association president Valdez said his organization would not hesitate in appealing, describing the ban as "totally exaggerated."

Suarez was banned for nine international matches on Thursday after he was found guilty of biting Italian defender Giorgio Chiellini in Uruguay's final Group D match. The Liverpool player was banned from any football-related activity for four months, during which time he will not even be allowed to enter a stadium.

"We have three days to appeal," Valdez said. "We will do it immediately, we will be filing the appeal by the end of today."

"There was no irrefutable evidence for such a harsh punishment," Valdez said, denouncing alleged double standards from the FIFA disciplinary committee. "We have seen more aggressive play in which the committee has not ruled this harshly," he said.

"Such behavior cannot be tolerated on any football pitch and in particular not at a FIFA World Cup, when the eyes of millions of people are on the stars on the field," Claudio Sulser, chairman of the disciplinary committee, said in a statement.

The incident occurred in the 79th minute of Uruguay's 1-0 win over Italy in their final Group D match in Natal on Tuesday. Suarez appeared to bite defender Chiellini on the shoulder while in the penalty area, just before Diego Godin's headed winner for Uruguay, but the offense went unseen by the referee.

The 27-year-old - who went on to become last season's Premier League top scorer and was voted Footballer of the Year by his peers - had also previously been banned for seven games when he bit PSV Eindhoven midfielder Otman Bakkal on the shoulder in 2010.