UN High Commissioner for Human Rights, Navi Pillay, has warned religious hatred in the Central African Republic is at an all time high. She also questioned the response from the international community to the atrocities. 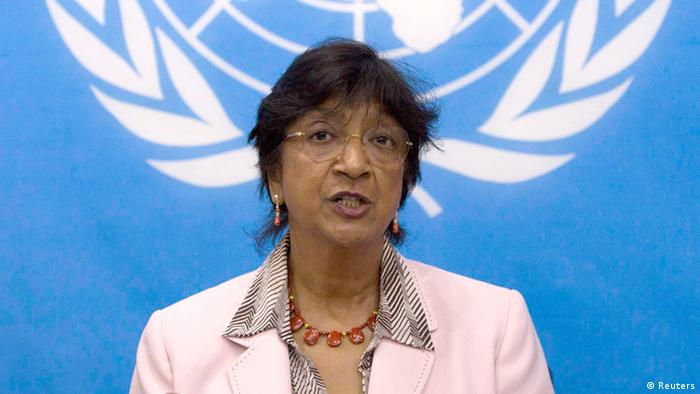 Navi Pillay made the strong statement at a press conference in the capital, Bangui, on Thursday.

The UN's top human rights official described the hatred between Christian and Muslim communities in the Central African Republic as being at "a terrifying level."

Pillay also questioned whether there would have been a "far stronger and more dynamic reaction by the outside world" if the atrocities were not happening "in a poor country hidden away in the heart of Africa."

Reports of escalating violence in the republic had included decapitating children, cannibalism and lynchings, Pillay said.

Some 6,000 African peacekeepers and 2,000 French troops were deployed to the Central African Republic in 2013 to stabilize the country, but have a limited presence outside the capital.

Pillay also said the absence of law and order, apart from foreign troops in the country, meant that too little was being done to arrest those guilty of violence.

She told waiting reporters that "this has become a country where people are not just killed, they are tortured, mutilated, burned and dismembered."

The unstable African state was plunged into chaos when rebels who helped topple President Francois Bozize a year ago then started their own campaign to rule the republic.

The ensuing campaign of killing, raping and looting by the mainly Muslim former rebels saw the Christian majority form "anti-balaka" vigilantes in response.

The UN has since described the inter-religious conflict as a form of ethnic cleansing against the Muslim minority.

Pillay said the joint French-AU military operation had helped to curb large-scale killings witnessed in December and January, but she warned more needed to be done.

"People continue to be killed on a daily basis, especially by the anti-balaka groups," she said.

The UN human rights chief told reporters that foreign peacekeepers and aid workers faced "terrible dilemmas" and had to choose between "unwillingly aiding the 'cleansing' of trapped Muslim populations, or leaving them - against their will - in places where they are in real danger of being slaughtered en masse."

The UN and other relief agencies estimate that nearly a quarter of the republic's population of 4.6 million have been displaced during the conflict.