Central African Republic has been torn apart by strife since a coup in March 2013. Religious violence between anti-balaka Christian militia and Muslims continues unabated. 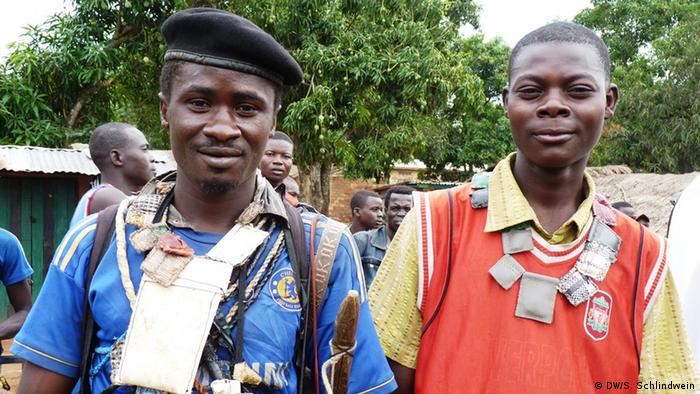 The anti-balaka have a long history in the Central African Republic. Originally, they were local self-defense groups. Every village had its own militia. Now they are pawns, manipulated by their political leaders. 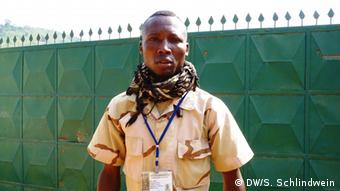 Anti-balaka spokesman Emotion Gomez: 'our movement has a long history'

Borab is a district in Bangui, capital of Central African Republic. Women sell fruit and vegetables on the street. The men sit in bars and drink beer. Young men, armed with machetes and automatic weapons, loiter nearby.

Borab is the headquarters and stronghold of the anti-balaka youth militia. It was also the constituency of former President Francois Bozize until he was toppled by the Seleka rebels in March 2013 and forced into exile. Many of his body guards and political allies live in Borab and for this reason it was here that the Seleka rebels unleashed their fury on the civilian population. There was much looting, women were raped and many people were shot and killed.

Borab was where resistance to Seleka began growing, said anti-balaka spokesman Emotion Gomez. His body is adorned with objects – bullets, a tin can, a lock and chain. He believes these charms or fetishes have some special power that will keep him safe from enemy bullets.

"Our name comes from anti-Balle AK meaning "against the bullets of the AK47," he said, referring to the Kalashnikov assault rifle.

"Our movement has a long history, anti-balaka have traditionally hunted down bandits and arrested them. That was before Bozize came to power. But once Djotodia had taken over and the Seleka started shooting and ill-treating us, we decided to regroup and fight them."

Gomez was referring to Michael Djotodia, the Seleka leader who toppled Bozize and was then ousted himself in January 2014.

The majority of anti-balaka fighters are youths without any schooling, sometimes even children as young as ten. They are motivated by their thirst for revenge.

"I am now all alone," one young anti-balaka fighter told DW. "When the Seleka took Bangui on March 24, 2013, they shot my father. Two months later, they came to our house again and said my father had hidden weapons there. My mother and sister told them there were no weapons in the house. But the Seleka shot them both. Fortunately, I was out at the time. When I came home I found them lying there, dead," he said.

These traumatized orphans were an easy target for anti-balaka recruiters. They gave the thousands of young men and women machetes and knives. Employing drugs and mystical charms or fetishes, the militia leaders convinced the young people they were immune to Seleka bullets. 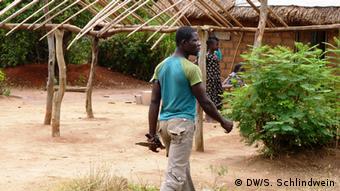 The town of Sibut, some 200 kilometers north of the capital Bangui, is dominated by the anti-balaka

Thirsting for revenge and high on drugs, the anti-balaka militia tip over into a murderous frenzy. This is the only explanation for the violence – and the cannibalism – directed not only against Seleka rebels but Muslim civilians as well.

When the anti-balaka revolt began in December, it was said to be the work of local gangs defending their villages. They are now better organized. Anti-balaka leaders are former army commanders and politicians who were forced from their posts in the Seleka coup.

Their political leader is Patrice Ngassona, former minister for youth and head of the football association. His house is the anti-balaka headquarters. This is where a colonel, whose name was given to DW as "12 Puissance", (meaning literally "12 volts"), directs military operations. He said that not all anti-balaka were genuine members of the movement – there were a number of criminals who pretended to belong to it.

He then showed DW a man he claimed was a prisoner of war. He looked as if he had been badly mistreated, or even tortured. "12 Puissance" said he was one of many former member of the armed forces they had arrested. He was a company commander with over three 300 men under him, in the eighth district in the city. "He wants to blame us for the crimes he has committed so that we are called to account under the law," the colonel said.

Such incidents occur often when various factions within the anti-balaka quarrel with each other. A power struggle is in progress for the anti-balaka leadership. It is a dangerous game because the violence could escalate even further and yet more people could driven from their homes and killed.

The UN has launched an inquiry into recent violence in Central African Republic, where fighting has displaced some one million people and left thousands dead. Investigators fear genocide will come next. (10.03.2014)

Christian militias have driven out most Muslims living in the western Central African Republic (CAR), according to the UN refugee chief. CAR's foreign minister has called for a surge of peacekeepers to halt the violence. (06.03.2014)

Waiting for the blue helmets in Central African Republic

Many Central Africans feel insecure in their country and every day is a struggle for survival. UN secretary General, Ban Ki-moon is calling for the deployment of more peacekeepers. (05.03.2014)