Waiting for the blue helmets in Central African Republic

Many Central Africans feel insecure in their country and every day is a struggle for survival. UN secretary General, Ban Ki-moon is calling for the deployment of more peacekeepers. 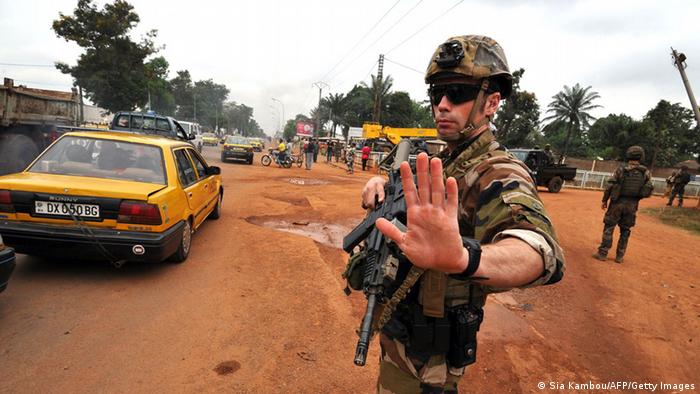 People are killed in Central African Republic every day. Gangs of youths known as "anti-balaka" attack Muslims, and in the north, Christians are attacked by the Muslim militia, the Seleka. In the capital Bangui, the Red Cross collects about a dozen corpses off the streets every day. Some have been hacked into pieces with machetes and others have been burned alive.

Muslim neighborhoods lie within close proximity to their Christian counterparts in Bangui. Usually there are only a handful of African Union troops to serve as a buffer between Christian anti-balaka gangs and Muslim civilians.

Members of the Muslim Seleka militia have been detained in several barracks. At the entrance to one military compound in the north of Bangui, just five African Union mission Rwandan troops are standing guard over the Selekas to make sure they don't escape.

In the small town Sibut, which is practically the front line between the anti-balakas and the Selekas, there are just 300 African peacekeepers. If fighting were to flare up again, the peacekeepers would be unable to intervene because they are too few in number. 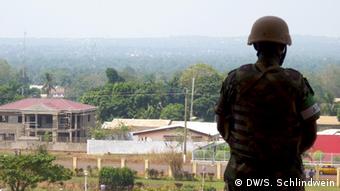 Nearly 6,000 African soldiers from neighboring countries have been deployed in Central African Republic under the umbrella of the African Union mission MISCA. About 2,000 French troops are also in the country under the UN mandate. The European Union is to send a further 1,000 soldiers.

But Bangui residents still don't feel safe. Muslims are even afraid of attending Friday prayers. One Muslim resident said he had never seen a single solder on patrol in the volatile neighborhood at that particular time.

He also accused the French troops of supporting the Christian militia. "We live here in terror. The anti-balakas attack us every day," he said agitatedly. "We were promised that the French would be here to protect us, but we are still being attacked." But he feels protected by the AU troops from the MISCA mission. "They do their job," he said.

Distrust of foreign troops runs deep. Muslims accuse the Cameroonian, Congolese and in particular the French forces of only looking after their own interests and of supporting the Christian militia. But Muslims do trust Burundian and Rwandan soldiers, and they are the ones who have been stationed in Muslim neighborhoods.

Cameroonian soldiers have been deployed to Bangui's Borab district which is loyal to the ousted President Francois Bozize. Some accuse Bozize of inciting the youth gangs to commit violence in the Central African Republic from his place of exile in Cameroon. Troops from Chad, also taking part in the MISCA mission, are siding with the Seleka rebels.

It is therefore impossible to maintain that the international peacekeepers are neutral mediators in this conflict. It would be highly desirable to limit the peacekeeping troops to those who come from countries that have no immediate interest in Central African Republic. 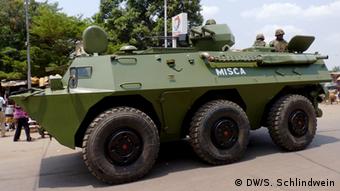 Addressing the UN Security Council on Monday (03.03.2014), Secretary General Ban Ki-moon called for the deployment of 10,000 UN troops and nearly 2,000 UN police officers to Central African Republic. Lea Koyassoum Doumta, vice president of the National Transition Council, welcomed the move. The announcement was a great relief, she told the DW. "In our country, the army is almost non-existent. The blue helmets can, however, assure the population that the country is in a transitional phase. Then we will soon be able to hold elections," she said.

But Ban Ki-moon also said the troops would arrive in Central African Republic by September at the earliest. A provisional solution would have to be found in the meantime.

MISCA soldiers outside Bangui are complaining of a lack of equipment such as camping beds, food rations and fuel for their vehicles. They also say power supplies are unreliable.

The mass exodus of Muslims from Bangui to the north of the Central African Republic has caused the conflict to spread to other parts of the country. Only a few roads have been built and they can only be used when accompanied by patrols. If the UN is to deploy troops to trouble spots in the bush quickly, it will need planes, pilots and air traffic control. But MISCA does not even have medical evacuation units at its disposal. Recently, a Rwandan soldier was shot in the chest; he had to be flown to hospital in Congo-Brazzaville on a commercial flight.

The people of the Central African Republic, who face a daily battle to survive, will hardly find it reassuring that they will have to wait six months before the first blue helmets arrive.

French President Francois Hollande has pledged his country's commitment to the Central African Republic as it struggles to end ethnic clashes. His visit comes ahead of an increase to French and EU troop deployment. (28.02.2014)

Fighting and the lack of infrastructure are making it almost impossible to get aid into the Central African Republic. After several weeks delay, a food convoy has just arrived in Bangui. Many more are needed. (28.02.2014)