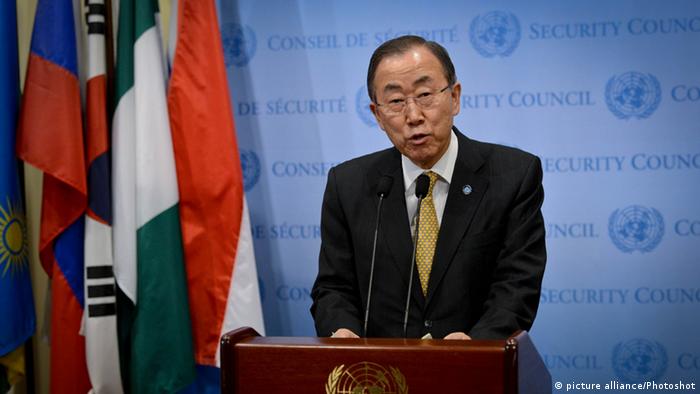 In a report to the members of the United Nations Security Council, Secretary-General Ban Ki-moon recommended deploying more peacekeeping personnel in order to help return order to the Central African Republic (CAR). The report proposed sending 10,000 soldiers, plus 1,820 police officers.

The primary task of the UN deployment would be for "the protection of civilians," in its initial stages, according to Ban's report.

CAR is already expecting an increase to the international peacekeeping presence soon. The European Union plans to send 1,000 soldiers to work alongside the 6,000 African Union soldiers already deployed as part of Operation Sangaris.

The French parliament recently approved an enlarged French military operation in CAR, bolstering its numbers by 400 to roughly 2,000 troops. Germany, for its part, has declined to deploy soldiers, but has expressed its willingness to provide logistical support to the mission.

While the deployment up until now has shown "progressive effectiveness," Ban said the UN needed to send in personnel "with the full range of capacities that required to address the deep-rooted nature of the complex crisis now unfolding in the Central African Republic."

Ban also said that the new wave of personnel would "be part of a broader, long-term engagement of the international community," as the UN could not address all of the problems facing CAR.

The recommendation to the 15 members of the Security Council followed a plea from CAR's interim president, Catherine Samba-Panza, to provide more support to its civilian population as it struggles to contain ethnic violence.

"I inherited a country on the verge of collapse, with rampant insecurity, a lack of state authority across its national territory and facing an unprecedented humanitarian disaster," the interim president told a women's forum in Kinshasa on Monday.

However, CAR's interim president has repeatedly called for more soldiers, a call which she renewed on Monday.

"Without massive support and assistance from the international community…we will not meet our goal of stabilizing the country and restoring constitutional order within the required timeframe."

Fighting broke out in CAR a year ago when the predominantly Muslim Seleka rebel group overthrew the government. It then installed Michel Djotodia as its president.

Fighting and the lack of infrastructure are making it almost impossible to get aid into the Central African Republic. After several weeks delay, a food convoy has just arrived in Bangui. Many more are needed. (28.02.2014)