The UN has appealed for $2 billion (roughly 1.5 billion euros) in 2014 to help more than 20 million people affected by famine in Africa's Sahel. The bid is part of a three-year humanitarian plan for parts of the region. 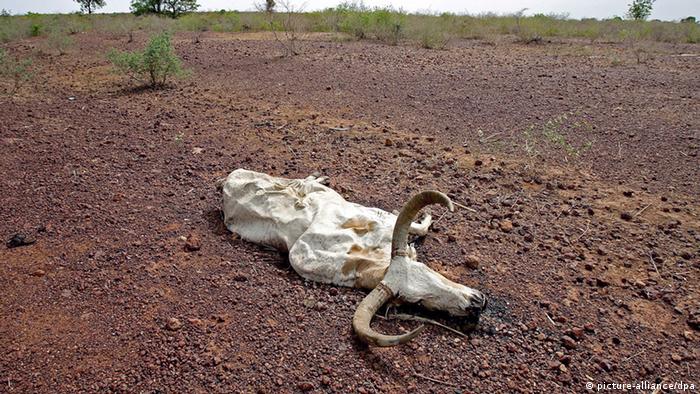 The UN has estimated 1.2 million people had to flee their homes due to violence and insecurity in the drought-prone Sahel region, the ecoclimatic belt of land between the Sahara desert to the north and the Sudania Savanna to the south that includes parts of 13 countries. Many of those displaced hail from Mali, Sudan, and the Central African Republic.

Of the 20 million people at risk, 2.5 million of them "need urgent lifesaving food assistance," according to a UN statement on Monday. Five million children under the age of five are at risk of acute malnutrition.

Hunger and malnutrition are still among the main concerns on the African continent. Governments and international organizations agree that agriculture and food security should be at the top of the African agenda. (18.09.2013)

"More people than ever are at risk in the Sahel and the scale of their needs is so great that no agency or organization can tackle it alone," Valerie Amos, the UN's top official for humanitarian aid, said on Monday. "The strategic plan for the region will help us reach millions of people with vital assistance, build resilience and save lives."

Amos was talking from a conference in Rome, where the appeal was launched and a three-year humanitarian plan affecting Burkina Faso, Cameroon, Chad, Gambia, Mali, Mauritania, Niger, Nigeria and Senegal was drafted.

The strategy emphasizes "strong partnerships with governments and development partners, a regional perspective and multi-year time frame to better address the chronic causes of the crises."

Of the $1.7 billion set as a target in the 2013 appeal for the region, around 63 percent was raised. The World Bank has pledged $1.5 billion in new regional investments over the next two years, while the European Union has announced it will provide 5 billion euros to six of the region's countries over the next seven years.

"The situation requires an early and large-scale humanitarian response in almost all countries of the Sahel," Kristalina Georgieva, European Commissioner for International Cooperation, Humanitarian Aid and Crisis Response, said on Monday.