In a move guaranteed to prevent filibustering, the government of the Maldives took their weekly cabinet meeting below the waves. The meeting highlights the Maldives' precarious situation due to rising sea levels. 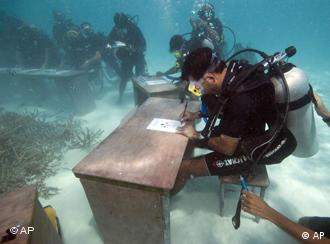 The government of the Maldives hopes this scene isn't foreshadowing

The Maldives' government held an underwater cabinet meeting on Saturday to draw attention to climate change while European leaders prepared for a week of climate talks ahead of the Copenhagen summit in December.

President Mohamed Nasheed and 13 of his ministers and other senior government officials sat, in SCUBA gear, around a table six meters (20 feet) below the water's surface and signed a resolution calling for global action to cut carbon emissions.

The ministers and president communicated by hand signal and signed the resolution on a white board with water proof markers in an act designed to focus global attention on rising sea levels caused by climate change.

More than 80 percent of the Maldives' archipelago, a luxury tourism destination, is less than one meter (3.3 feet) above sea level, and at risk of being submerged.

"We should come out of Copenhagen with a deal that will ensure that everyone will survive," Nasheed said as he floated in the water after the cabinet meeting.

Seeking unity prior to Copenhagen

Meanwhile, in Europe, Swedish environment minister Andreas Carlgren was preparing for what's being called a "super week in Luxembourg," where European Union ministers will come together starting Tuesday for talks designed to establish the EU's position on every aspect of global warming ahead of Copenhagen.

There is a lot of ground to cover, however, and some insiders think there are still too many disagreements between the 27 member states of the EU.

According to internal documents, Sweden wants to have the EU fast-track funds to developing nations in order to fight climate change, but some argue that it is too early to pledge funds internationally with the financial crisis still playing havoc in Europe.

But time might be running out for the Maldives in the Indian Ocean. In 2007, the UN's Intergovernmental Panel on Climate Change warned that a rise in sea levels of 18 to 59 cm (7 to 24 inches) by 2100 would be enough to make the country virtually uninhabitable.

As world leaders meet at the UN to discuss climate change, Bjorn Lomborg tells DW he expects little to come from the talks. He tells politicians there are better ways to spend billions than on fighting climate change. (22.09.2009)

Climate is high on the agenda in the USA at yet another round of climate conferences, one of many held around the world. While some say the discussions are necessary, others say the time for action, not talk, has come. (22.09.2009)