In the second attack within 48 hours, two Tanzanian UN peacekeepers have been killed in an ambush in eastern Congo. Their unit was attacked in an area where Islamist Ugandan rebels are active. 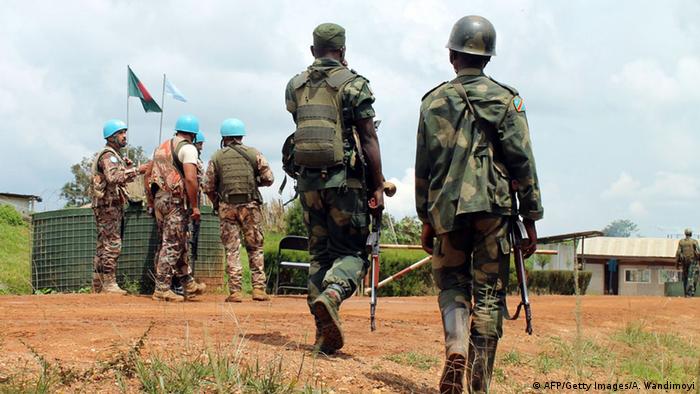 The head of the UN peacekeeping mission in the DRC, Martin Kobler, condemned the attack on a Tanzanian unit of the peacekeeping force in a village in the Beni region.

The patrol was ambushed in an area where government forces are fighting Ugandan rebels in North Kivu province. "The ambush took place today, this afternoon ... The death toll is two and we have a couple of injured," Felix Basse, spokesman for the mission known as MONUSCO, said on Tuesday.

The ambush was the second attack on UN forces in the area in 48 hours. On Monday, a MONUSCO helicopter was fired on by unidentified gunmen.

Earlier on Tuesday the Congolese army said it had killed 16 Ugandan Allied Democratic Forces (ADF) rebels during fierce fighting in the same area over the weekend.

The army launched Operation Sukola I against the ADF in 2014. The Islamist group has been accused of killing 300 villagers near Beni between October and December last year.

The UN is pushing for the disarmament of dozens of rebel and splinter groups in eastern DR Congo after two decades of conflict, much of it fueled by the lucrative trade in minerals.

The World Food Program has been providing food assistance to thousands of people.