The UN resolution has been passed after the United States abstained from voting. The measure has been rejected by Israel. 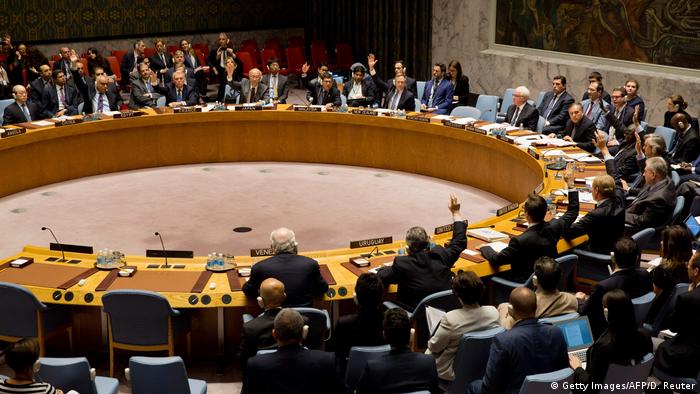 The United States abstained from the vote, allowing the measure to pass by a vote of 14 in favor in the 15-member council. The resolution had been put forward for a vote on Friday by New Zealand, Malaysia, Venezuela and Senegal - one day after Egypt withdrew it under pressure from Israel and US President-elect Donald Trump.

US Ambassador to the UN Samantha Power said that "continued settlement building undermines Israel's security." The Palestinian Presidency meanwhile commented that the UN vote amounted to a "big blow" to Israel, calling this a "historic day".

Trump meanwhile only said that upon his inauguration, "things will be different" in US-UN relations.

The office of Israeli Prime Minister Benjamin Netanyahu squarely rejected the vote in a statement:

"Israel rejects this shameful anti-Israel resolution at the UN and will not abide by its terms," the statement said.

"Israel looks forward to working with President-elect Trump and with all our friends in Congress, Republicans and Democrats alike, to negate the harmful effects of this absurd resolution."

Amid widespread international support to work toward bringing an end to the controvsial policy of building settlements, the resolution is reportedly near-impossible for the Trump administration to reverse. While the resolution does not call for imposing sanctions on Israel if it fails to comply, it could significantly weaken Israel's lobbying and negotiating power in future peace talks.

Settlement construction in the West Bank has skyrocketed since Israeli Prime Minister Benjamin Netanyahu took office in 2009, with 15,000 additional Israeli Jewish settlers moving into homes on the West Bank in 2016 alone.

"This historic decision expresses the consensus of the international community on the illegality of Israeli settlements and reaffirms the Palestinian people's historic right (to live) in Jerusalem and its historic lands," Jordan's information minister Mohammad al-Momani said Saturday, adding that the resolution reinforced his country's historic position on the need for a two state solution.

The resolution, initially circulated by Egypt, was originally going to be discussed the previous day but then faced an indefinite postponement, after US President-elect Donald Trump reportedly intervened and spoke to Egypt's president, Abdel Fattah el-Sissi. Egypt represents all Arab states on the Security Council.

Reuters reported that Israel had directly asked President-elect Trump to assert his influence to avoid a vote in favor of the measure. A senior Israeli official said that Israeli officials had contacted Trump's transition team at a "high level" after learning that US officials would not veto the vote but rather abstain from it.

Trump has spoken out in support of Israeli settlements before. The Obama administration, by contrast, views settlements as a hindrance to peace efforts. A senior US official told Reuters that the Obama administration had not been involved in any part of the UN resolution going forward following Israeli accusations saying that the United States was pushing for the initiative.

Israel's ambassador to the UN had earlier called on the United States to continue to "stand by" Israel over the resolution designed to bring an end to Israeli settlements in the West Bank and east Jerusalem.

"We call on the United States to stand by us and we expect our greatest ally to continue with its long-standing policy and to veto this resolution," Danny Danon said in a statement.

US Senator John McCain commented that the US' abstention from the vote made the US "complicit in this outrageous attack against Israel."

An Israeli official, speaking on condition of anonymity, told the Agence France Presse (AFP) news agency that outgoing US President Barack Obama and Secretary of State John Kerry were "behind this shameful move against Israel at the UN."

"President Obama could declare his willingness to veto this resolution in an instant but instead is pushing it," the official said, calling it an "abandonment" of the Jewish state, "which breaks decades of US policy of protecting Israel at the UN and undermines the prospects of working with the next administration of advancing peace."

"The US administration secretly cooked up with the Palestinians an extreme anti-Israeli resolution behind Israel's back which would be a tail wind for terror and boycotts and effectively make the Western Wall occupied Palestinian territory," the same official told the Associated Press news agency.