The UN Security Council has urged rebels in eastern Ukraine and the Kyiv government to cease hostilities, as violence continues despite Sunday's ceasefire. Both sides have accused each other of violating the truce. 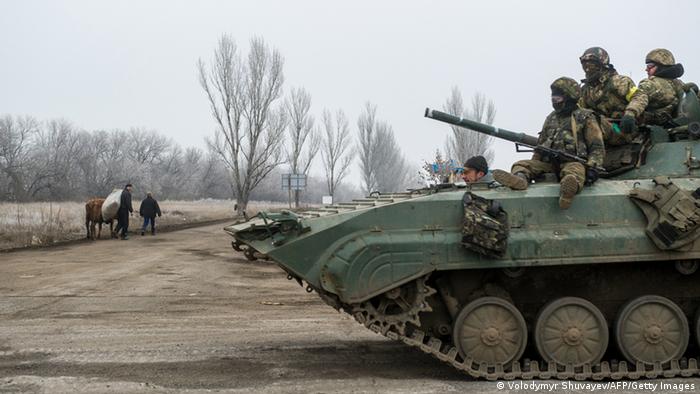 The UN Security Council on Tuesday called on warring factions to end the violence in eastern Ukraine.

"The Security Council called on all parties to immediately cease hostilities and abide by commitments agreed in Minsk, including facilitating access for the OSCE [Organization for Security and Cooperation in Europe] Special Monitoring Mission to monitor and verify compliance with the Minsk Agreements," the council said in a statement.

The international body also expressed concern over continued fighting in the strategic railway hub Debaltseve which has been a point of contention for rebels and Kyiv.

Both the rebels and government forces have yet to withdraw heavy weapons - a crucial condition in implementing the ceasefire which came into force on February 15. The ceasefire deal also laid out a strategy for self-governance in Ukraine's rebel territories and called for a local election in the separatist areas.

Members of the council also adopted a Russian-backed resolution calling on all sides to respect the Minsk agreement on enforcing the ceasefire in Ukraine's battle-ravaged east. The council expressed "its full respect for the sovereignty, independence and territorial integrity of Ukraine" and said it was concerned at the "tragic events and violence in eastern regions" of the country.

The council also affirmed a resolution demanding access to the site where Malaysian Airlines Flight MH17 crashed last July with 298 people on board.

Russia's proposal met with criticism from the US, which described Moscow's actions as "ironic," considering that it was backing the rebels in eastern Ukraine.

"Russia signs agreements then does everything within its power to undermine them, Russia champions the sovereignty of the nations and then acts as if a neighbor's borders do not exist," Samantha Power, the US ambassador to the UN, told the Security Council after the vote.

British UN Ambassador Mark Lyall Grant also told the council that Russia would have to play a full role in ensuring compliance with the ceasefire. Russia offered several ceasefire proposals last year, but they were rejected because of anger over Moscow's annexation of Crimea last April which soon turned into a war between Kyiv and separatists in eastern Ukraine.

Nearly 5,600 people have died in the violence in the last 10 months.