The UN rapporteur on arbitrary executions has urged El Salvador to end what she deems impunity for killings by police. Agnes Callamard also says the country's abortion prohibitions contribute to women's deaths. 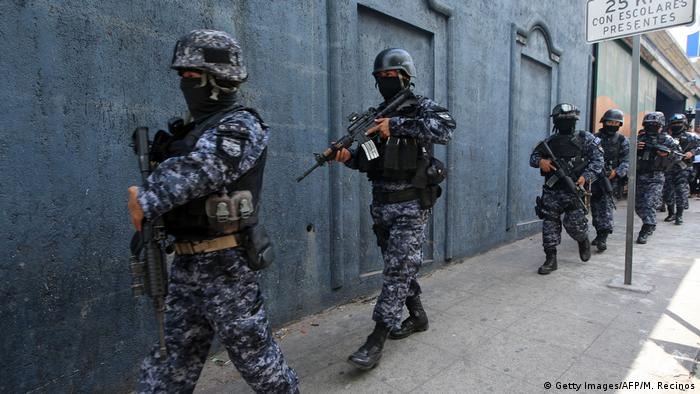 After over a week in El Salvador, the UN's rapporteur on extrajudicial, summary or arbitrary executions called on the government to end the impunity that has led to rampant violations since "extraordinary measures" were introduced to fight gang violence in 2016.

"El Salvador, with one of the highest homicide rates in the world, must urgently take more effective measures to prevent the loss of life," Agnes Callamard told reporters after her trip on behalf of the UN's Office of the High Commissioner for Human Rights.

"During my visit, I met fathers and mothers who have lost their children to the violence, young women who have been repeatedly submitted to sexual violence, young men so traumatized by the experience of violence lived at the hands of gangs or security officials that they can barely whisper their story, grandparents living in constant fear of the day that the violence will recruit their grandchildren," Callamard reported.

"The victims have no choice but to walk the same roads as those who would violate them, to run into their torturers on random street corners and to see the killers of their child walking around every day," she added.

Callamard called prison circumstances among the worst that she has seen, with some detainees being denied visits by their families and others held in complete isolation. "This brings me to the conclusion that the final goal is the dehumanization of those detained," she said.

She said zero-tolerance abortion laws amounted to the "arbitrary" execution of women who had no safe alternative to illegal procedures. Callamard welcomed the Farabundo Marti National Liberation Front's legislation to permit abortion in cases of unviable fetuses, dangers to women's lives, and rape.

In response to the proposal to ease some restrictions, the right-wing Nationalist Republican Alliance has announced that it would seek to increase the penalty for obtaining the procedure to 50 years — similar to that of aggravated homicide. Some women have already received prison sentences of 12-30 years for abortion.

The United States has recently indicated that it could deport tens of thousands of Salvadorans who had received sanctuary in the Americas' richest country.