The UN Human Rights Council will investigate extrajudicial killings in the Philippines. At least 6,000 people have been killed by police in the war on drugs, and rights groups think the number is much higher. 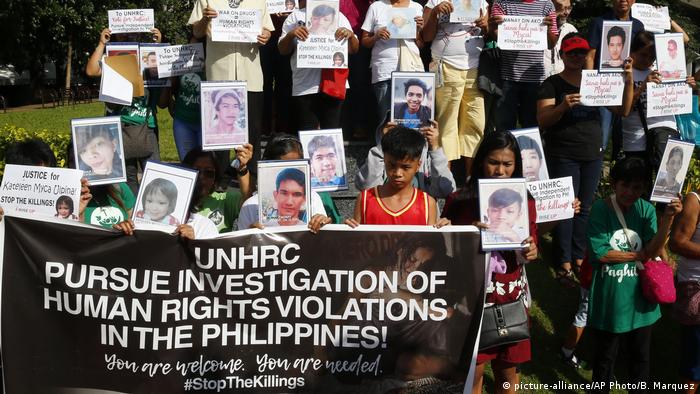 The UN Human Rights Council voted on Thursday to initiate a probe into the Philippines controversial war on drugs led by President Rodrigo Duterte.

The resolution, tabled by Iceland, was passed by 18 countries in favor and 14 against, with 15 abstentions, including Japan.

The exact number of deaths in Duterte's violent war on drugs cannot be verified, but at least 6,000 have died since he launched the campaign upon taking office in mid-2016, in operations where the police said suspects were armed and fought back.

Non-government groups have claimed a much higher death toll, including many suspects killed by motorcycle-riding gunmen who human rights groups suspect were financed by police officers. Human Rights Watch said more than 12,000 people have died.

"This is not just a step towards paying justice for the thousands of families of victims of extrajudicial killings in the Philippines, but it is also a message that we collectively send out to those who have praised President Duterte," said Ellecer Carlos from the Manila-based rights group iDefend.

"This war on drugs, as we have repeatedly said, is a sham war," he told media in Geneva.

On Monday, Amnesty International urged the United Nations to investigate potential "crimes against humanity" that occurred in the Philippines during Duterte's bloody anti-drug crackdown.

In its report "They Just Kill," the London-based rights watchdog urged the UN Human Rights Council to approve a resolution calling for an investigation into the Philippines, where there was now a "perilous normalization" of illegal executions and police abuses.

The Philippines rejected the UN resolution, saying it was "politically partisan and one-sided."

The Philippine ambassador to the UN, Evan Garcia, said after the vote that the Duterte administration was committed to upholding justice. "We will not tolerate any form of disrespect or acts of bad faith. There will be consequences," Garcia said.

"Do not presume to threaten states with accountability for a rough approach to crushing crime, at which some of your countries are complicit at worst and tolerant at best," he said in a statement.

"You don't have the wherewithal, so all you can do is insult. Thus, the Philippines rejects this resolution," he added.

"It was quite clear that they threatened consequences for those who had supported the resolution, which in turn makes us concerned for the many human rights defenders, civil society activists and journalists on the ground," she said.

When asked by reporters in Manila whether he would allow a UN investigation into drug war,  Duterte replied: "Let them state their purpose, and I will review."

Philippines: What happens to the drug war under Ferdinand Marcos Jr.? 19.07.2022

Human rights groups and grieving families who have lost their loved ones in the bloody campaign against drugs fear that the same violence will continue and justice will elude them under Ferdinand Marcos Jr.'s presidency.