In his annual state of the nation address, President Rodrigo Duterte has said his brutal war on drugs in the Philippines "is far from over." Thousands rallied outside Congress against his autocratic rule. 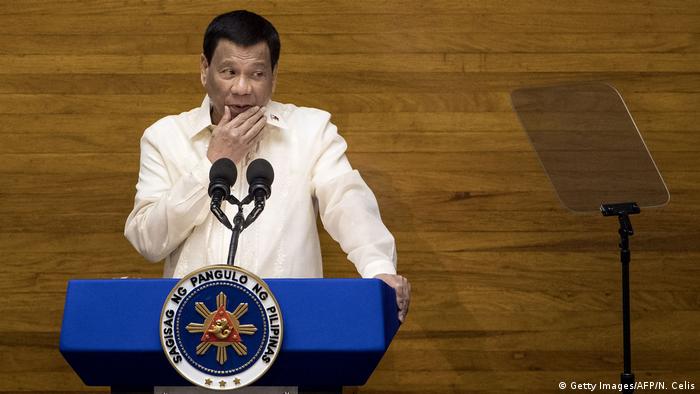 Philippine President Rodrigo Duterte vowed to continue his campaign against illegal drugs in his annual state of the nation address on Monday.

Duterte, 73, told a joint session of Congress that protests from activists and other critics will not dissuade him from his fight against illegal drugs, which has killed thousands and drawn international condemnation.

"Let me begin by putting it bluntly: The war against illegal drugs is far from over," said Duterte, who is entering the third year of his six-year term. "The illegal drugs war will not be sidelined. Instead, it will be as relentless and chilling, if you will, as the day it began."

'My concern is human lives'

Duterte said that billions of Philippine pesos worth of narcotics were still being seized by law enforcement. Since his war began, police have killed more than 4,500 people they say were suspected drug pushers who resisted arrest, although human rights groups have said the real number could be three to five times greater.

The crackdown is now the subject of a preliminary examination by prosecutors of the International Criminal Court (ICC). 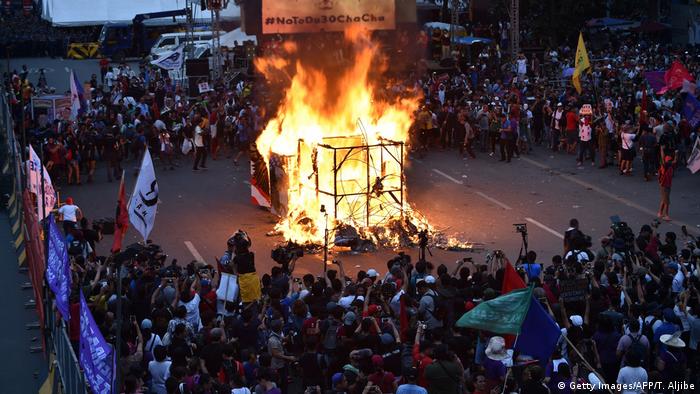 Tens of thousands of flag-waving demonstrators, representing the church, women's groups and labor unions, rallied near Congress in the Philippine capital of Manila to protest Duterte's autocratic rule and the violence under his administration. The Philippine leader said such protests were "misdirected."

"Your concern is human rights, mine is human lives," he said. "The lives of our youth are being wasted and families are destroyed, and all because of the chemicals called shabu (a slang term for methamphetamine in the region), cocaine, cannabis and heroin."

Duterte read his prepared 50-minute speech in full, unlike his previous two addresses, during which he went off script on to blast critics in tangential rambles.

His speech was delayed by more than an hour after a leadership row erupted in the Philippine House of Representatives, live on television, while trying to elect a new House speaker, Former President Gloria Macapagal Arroyo.

Arroyo, 71, backed by an entourage of allied legislators, took the main seat in the center of the House's plenary hall — a sign that she was replacing House Speaker Pantaleon Alvarez. Arroyo tried to speak through the ensuing chaos, but her microphone was turned off. She attempted to yell to explain what was happening, but she was resigned to leaving the stage. 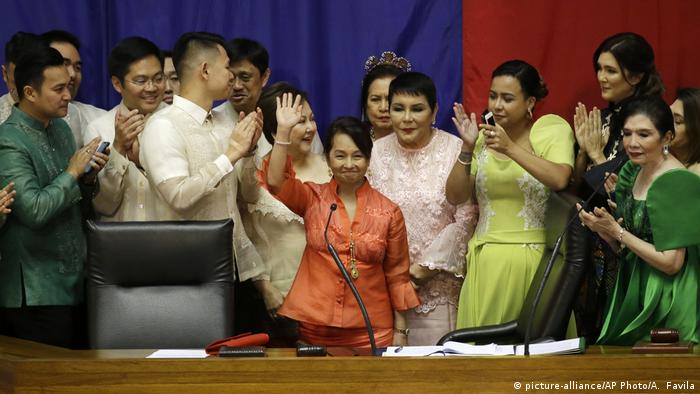 Alvarez and Senate President Vicente Sotto, both close allies of Duterte, led a visibly confused Philippine president, who had arrived at the heavily secured congressional complex via helicopter, to a holding room as the dispute over House leadership unfolded in the chamber.

"They chose to disrespect their own president and attend to their own ambitions in full view of the nation. For almost an hour, it seemed that nobody was in control," opposition Senator Risa Hontiveros said. "This is the true state of the nation. It is petty infighting, backstabbing, and brinkmanship, all done at the people's expense."

Arroyo was eventually sworn in late Monday by the 292-member house, which is largely dominated by the president's allies, before Duterte's speech.

The Duterte administration is moving to make changes to the nation's constitution, to turn the Philippines into a federal state. Critics say it is but a smokescreen to prolong his stay in power. Ana P. Santos reports. (01.02.2018)