Pierre Krähenbühl, the head of the UN relief agency for Palestinian refugees, has resigned amid a probe into alleged sexual misconduct and nepotism. The Swiss national has denied accusations of inappropriate behavior. 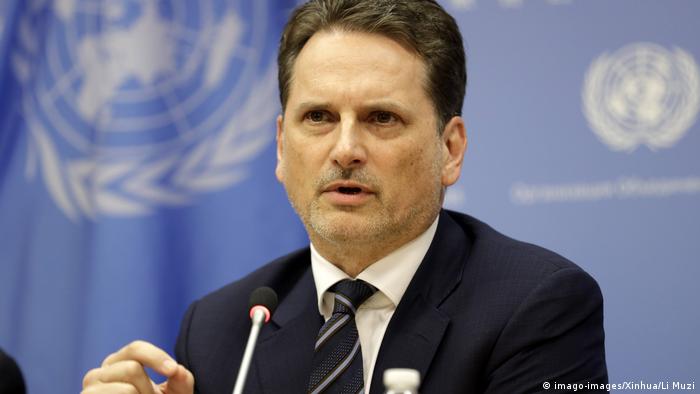 The UN Secretary-General's office announced on Wednesday that the head of the agency that aids Palestinian refugees resigned on Wednesday following an internal investigation into misconduct allegations.

Swiss national Pierre Krähenbühl, Commissioner General of the United Nations Relief and Works Agency (UNRWA), stepped down after being placed on "administrative leave" earlier on Wednesday.

The resignation comes after an ethics report raised allegations of possible sexual misconduct, nepotism and other abuses of power within the agency.

UN spokesman Stephane Dujarric told reporters in New York that the resignation was effective immediately. He added that the initial investigation did not include "fraud or misappropriation of operational funds."

"At this time, it is vital that member states and other partners remain committed to UNRWA and the services it provides," Dujarric added.

In a statement issued earlier on Wednesday, the UN said the initial findings of the inquiry revealed "management issues" that were directly linked to Krähenbühl.

Meanwhile, a temporary replacement has been installed. "The UN Secretary-General has appointed Mr. Christian Saunders as the Officer-In-Charge for the interim period," the statement added.

In July this year, the Swiss foreign ministry said it would suspend funding of the UNRWA after the agency's own ethics department reported allegations of discrimination and other issues within the UNRWA.

At the time, Krähenbühl, who has led UNRWA since 2014, "unreservedly" rejected the allegations, adding he was prepared to cooperate with the investigation.

The UNRWA provides aid to over 5 million registered Palestinian refugees in the West Bank, Gaza Strip and East Jerusalem as well as those in Lebanon, Syria and Jordan.

The agency has faced financial difficulties since last year when the United States pulled its aid contribution which amounted to $360 million per year. Both US President Donald Trump's government and Israel have accused the UNRWA of anti-Israeli incitement and mismanagement.

UN to open Palestinian schools despite US funding cuts

Even with a budget shortfall, UNRWA said it is crucial to "protect the fundamental right to education." But the UN agency charged with assisting Palestinian refugees has said they aren't "out of the woods" yet. (16.08.2018)

European countries backed a United Nations statement criticizing China's treatment of Uighurs and other Muslims. But many more countries were quick to defend Beijing. (30.10.2019)

UN agency for Palestinian refugees on the verge of collapse 19.11.2020

The United Nations Relief and Works Agency for Palestine Refugees (UNRWA) is facing insolvency. Financial aid for millions of refugees is at risk.

Philippe Lazzarini, the head of the UN agency for Palestinian refugees, UNRWA, says that what's perpetuating the dire situation the Palestinians find themselves in is the absence of a political solution. Speaking to DW, he explains how UNRWA is contributing to a future for the Palestinians.

COVID pandemic, economic crisis, few rights: Things are getting harder and harder for displaced Palestinians in Lebanon. One reason is the chronic underfinancing of the UN agency responsible for them.