The UN committee that vets nations on human rights has called on China to ensure universal suffrage in Hong Kong. The panel has left unchanged its rating for the zone, where student-led protests continue. 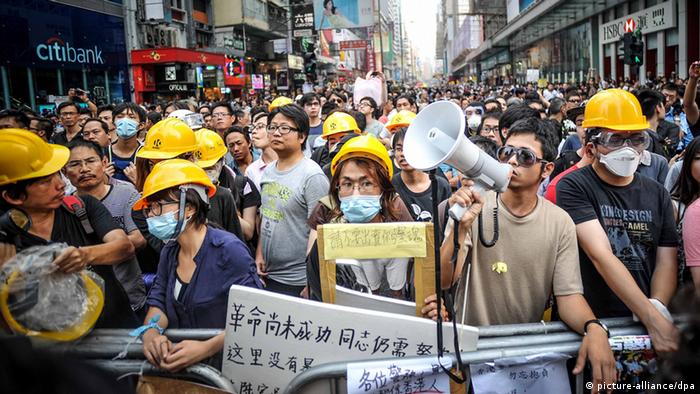 On Thursday, the UN Human Rights Committee pressed China to enact democratic reforms in Hong Kong and accused authorities in the semiautonomous city of failing to properly heed calls for change.

The Geneva-based panel of 18 civil and political rights experts left Hong Kong at C1 on its descending scale of A to E because "no actions" had been taken to implement the committee's previous recommendations.

During its 2013 review, the UN body had announced that "all necessary measures" would need to be taken to implement "universal and equal suffrage."

In August, China's National People's Congress ruled that candidates for Hong Kong's 2017 leadership election would be chosen by a pro-Beijing committee.

A month ago, activists launched mass protests to press their demand that the public, and not Beijing, have the right to nominate candidates.

The UN panel's chairman, Konstantine Vardzelashvili, said on Thursday that the committee was concerned about the "lack of a clear plan to institute universal suffrage and ensure the right of all persons to vote and to stand for election without reasonable limitations."

Student representatives held their first meetings with Hong Kong's Beijing-backed leaders on Tuesday. The students then accused the government of failing to make any meaningful offers.

Last week, protests degenerated into scuffles between police and demonstrators, with dozens injured.

Confrontations also ensued between protesters and residents, as well as business proprietors frustrated by the disruption caused by blockades of several main roads.

Analyst: 'Beijing will not accept real democracy in Hong Kong'