UN Secretary General Antonio Guterres said the suffering of the Yemeni people "breaks my heart." The UN has brokered seven ceasefires between the warring sides but all have failed, and now there is the threat of famine. 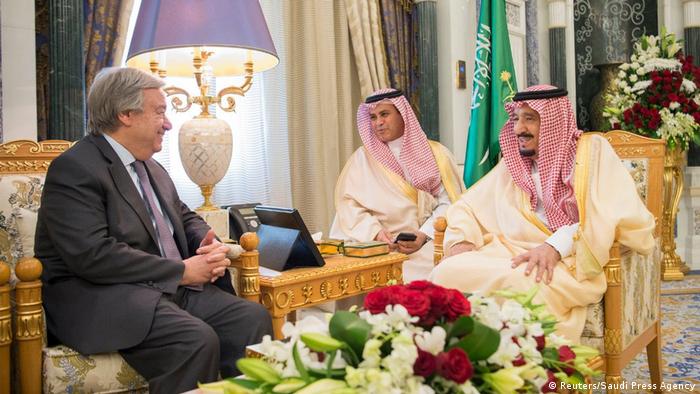 The UN Secretary General wants peace talks to resume in war-torn Yemen, but even as Antonio Guterres made his plea he was forced to defend his envoy from charges of bias.

The UN has brokered seven ceasefires between the government and rebel forces and every one of them has failed.

"You know, I am a Catholic. And Catholics believe in resurrection," Guterres told reporters during a visit to the Saudi capital, Riyadh. "So if negotiations are dead they can always resurrect. And I do believe that they need to for a very simple reason, the suffering of the Yemeni people."

To see them "suffering so much is something that really breaks my heart," he said during a joint press conference with Saudi Foreign Minister Adel al-Jubeir after talks with King Salman (pictured above with Guterres).

The international body has repeatedly called for a ceasefire to allow for the delivery of relief supplies.

A Saudi-led coalition of several Arab states began airstrikes inside Yemen in March 2015 to support the internationally recognized government of President Abedrabbo Mansour Hadi against the Iran-backed Houthi rebels.

Earlier on Sunday, an Apache helicopter from the Saudi-led military coalition wounded three Yemeni soldiers when it fired a missile at a military vehicle outside Aden International Airport, according to Yemeni security officials.

The attack struck troops loyal to the airport's chief of security, who had refused to accept a government order that he be replaced.

The incident was the latest example of the inability of Yemen's internationally recognized government to enforce order. But it marked the first time its allies, the coalition of mostly Gulf Arab states, had intervened militarily in power struggles within the Yemeni armed forces.

The Houthis are allied with former members of the security forces loyal to ex-President Ali Abdullah Saleh.

Late last month, UN peace envoy Ould Cheikh Ahmed told the UN Security Council that Hadi "continues to criticize" the peace proposals without agreeing to discuss them. "And this will hinder and impede the path towards peace," he said.

His comment was the latest to irk Houthi rebels, who accused the envoy of being biased against them. They have demanded his replacement. But Gutteres reaffirmed his support for the envoy, saying during Sunday's press conference, that Ahmed had "his full support," and described him as a professional working in an independent manner.