Warning of famine, UN asks for $2.1 billion in aid for Yemen

Millions of people are at risk of starvation in Yemen. The UN is asking for financial support to provide for nearly 10 million people in need of assistance. 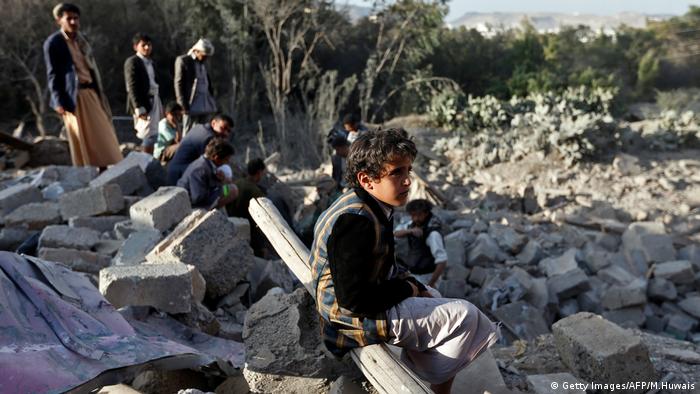 The United Nations on Wednesday appealed for $2.1 billion (2 billion euros) to provide aid to millions of people in war-ravaged Yemen, where the threat of famine looms.

"The situation in Yemen is catastrophic and rapidly deteriorating," UN humanitarian coordinator Jamie McGoldrick said in an opening statement to the humanitarian appeal.

Nearly 19 million people need aid this year, about three-quarters of the country, the UN said. That includes about 10 million people in need of acute assistance to save or sustain their lives.

The appeal from the UN and other humanitarian agencies aims to provide for 12 million people after only 60 percent of financial requirements were met last year.

UN humanitarian chief Stephen O'Brian warned that "famine is a possible scenario" this year if no action is taken.

"Immense human suffering is unfolding in front of our eyes, caused by an ongoing conflict compounded by a collapsing economy and key public and social institutions in disarray," O'Brian told the UN in Geneva.

The conflict pits Shiite Houthi rebels and forces loyal to former President Ali Abdullah Saleh against a Saudi-led Arab coalition trying to reinstate current President Abd-Rabbu Mansour Hadi. While the origins of the civil war are largely domestic, the conflict has since morphed into a broader proxy war between regional rivals Iran and Saudi Arabia.

The Arab coalition's air campaign and naval blockade since March 2015 have exacerbated the humanitarian crisis, with repeated airstrikes targeting infrastructure. Since the Saudi-led intervention, at least three million people have been displaced and more than 7,500 people killed, according to the UN.

Houthi rebels have also been accused of random artillery strikes and imposing restrictions on the movement of goods and assistance.

The conflict has raised concern all parties, but especially the Saudi-led coalition, have committed violations of international law.

"The Yemeni economy is being willfully destroyed," the report said, pointing to the destruction of critical economic infrastructure. "Mainly airstrikes - but also shelling and other attacks - have damaged or destroyed ports, roads, bridges, factories and markets."

Yemen imports 90 percent of its food, fuel and medicine, much of it through the Al Hudaydah Port, which the Arab coalition bombed. The coalition also imposes a naval blockade and restricts goods entering the country. It has also banned commercial flights from Sanaa airport, cutting off access to medicine and the possibility of civilians receiving medical treatment outside the country.

The dim picture is likely to get worse, as conflict and economic decline are leading to the collapse of basic services and institutions at a time they are needed more than ever, the UN said.

An estimated 8 million people in Yemen have lost their livelihoods or are living in areas with minimal or no basic services. Nearly 15 million people lack basic health care and 45 percent of health care facilities are functioning.

Some 2 million children are out of school, posing a long-term generational challenge.

Meanwhile, the collapsing economy means the state is running out of money to pay employees, hitting breadwinners who provide for whole families. A liquidity crisis has in turn created shortages and commercial lenders are reluctant to provide credit to traders.

"The end result is an economic environment in which basic commodities are becoming scarcer and more expensive just as people's livelihoods opportunities and access to cash are receding or disappearing altogether," the UN said. "Humanitarian partners face growing pressure to compensate for the entire commercial sector, which is beyond both their capacity and appropriate role."

The US military has confirmed the reports of civilian casualties in the Yemen raid. The news comes the same day President Donald Trump paid tribute to a soldier killed in the operation. (02.02.2017)

Yemen conflict all but ignored by the West

Atrocities are being committed against an innocent Yemeni population on a scale as serious as Syria and Iraq. But why doesn’t this story get as much media attention as those conflicts? Gouri Sharma reports. (17.01.2017)