UN Secretary General Ban Ki-Moon has decried Western boycotts of an anti-racism conference, which some fear could become an anti-Semitic forum when Iranian President Mahmoud Ahmadinejad delivers a keynote speech. 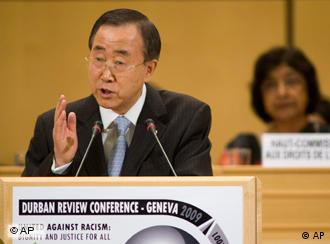 UN chief Ban Ki-moon opened the meeting without the US, Germany and Israel

"Some nations, who by rights should be helping to forge a path to a better future, are not here," the secretary general said as he opened the meeting in Geneva, telling delegates he was "profoundly disappointed."

"I deeply regret that some have chosen to stand aside. I hope they will not do so for long," Ban added, before holding his own meeting with Ahmadinejad. 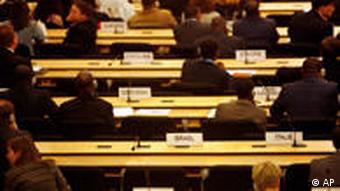 Poland became the latest nation to boycott the meeting after Germany, the United States, Israel, Canada, Australia, Italy, the Netherlands and New Zealand.

German Foreign Minister Frank-Walter Steinmeier said Berlin's decision was made based on concerns that the event would be "misused as a platform for ulterior interests."

The vice president of Germany's Central Council of Jews, Dieter Graumann, welcomed Steinmeier's decision in an interview published by the online portal of Germany's Handelsblatt newspaper.

"The whole event is a propaganda show for fanatical haters of Israel," Graumann said, adding that European Union member states' failure to present a united front in boycotting the conference was a "disgrace."

Britain, for example, said it would attend the event but would not send any high level officials, while the French delegation urged other European representatives to walk out of the conference if Ahmadinejad made "anti-Semitic accusations."

Ahmadinejad has caused outrage in Israel and other Western nations by repeatedly saying the Holocaust was a "myth" and saying the Jewish state should be "wiped off the map."

Before his arrival in Geneva, he launched a new broadside against Israel, saying "the Zionist ideology and regime are the flag-bearers of racism." 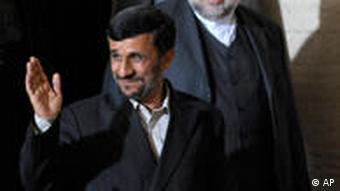 Ahmadinejad's presence at the conference is controversial

The European Jewish Congress said Ahmadinejad's presence meant the UN had "put the fox in charge of the hen house."

Meanwhile, the diplomatic fallout has spread as Israel recalled its ambassador in protest at Swiss President Hans-Rudolf Merz's decision to meet Ahmadinejad.

The Sunday meeting was the Iranian leader's first formal discussion with a Western head of state since he took office in 2005.

European diplomats fear that this year's conference in Geneva is likely to take an aggressively anti-Israeli, anti-Western line given that preparations were dominated by Libya, Cuba and Iran.

Negotiators in Geneva said on Friday that most Western and Muslim states had agreed to a revised declaration removed all references to Israel and the Middle East.

But diplomats say Middle Eastern nations insisted that a clause about the incitement of religious hatred remain in the text, which many Western countries see as a curtailment of free speech.

US President Barack Obama said anti-Israeli language in the draft final communique that was "oftentimes completely hypocritical and counterproductive" had been the red line for his administration. 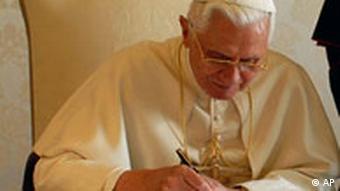 Meanwhile, Pope Benedict XVI's decision to send a Vatican delegation to the conference has opened a new rift in relations with Jewish groups.

"By participating, the Vatican has given its endorsement to what is being prepared there [against Israel]," Rome's chief rabbi, Riccardo Di Segni, told the Italian newspaper La Stampa.

Shimon Samuels, head of the European office of the Simon Wiesenthal Center, said the Vatican "is giving a seal of approval in the hate campaign" against Israel.

"This is not a position on which one can hedge," Samuels told Reuters news agency.

"You can't have it both ways. The Vatican is a powerful voice and [a boycott] could have had a strong demonstrative effect."

"This is an international conference promoted by the United Nations and the Holy See. Just because some important countries are not attending does not mean that the Holy See cannot have a positive and constructive dialogue there," he said.

On Sunday the pope, who makes his first trip to Israel as pontiff next month, called the conference an important initiative and said he hoped it could help "put an end to every form of racism, discrimination and intolerance."

EU still undecided on whether to attend UN anti-racism talks

Diplomats believe they have come up with a suitable compromise draft declaration ahead of next week's controversial anti-racism conference in Geneva, a senior UN official said on Friday. (17.04.2009)