The head of the UN's nuclear watchdog has arrived in Iran to discuss nuclear inspections. During their weekend summit, the G8 called on Tehran to seize the opportunity for a settlement during talks in Baghdad this week. 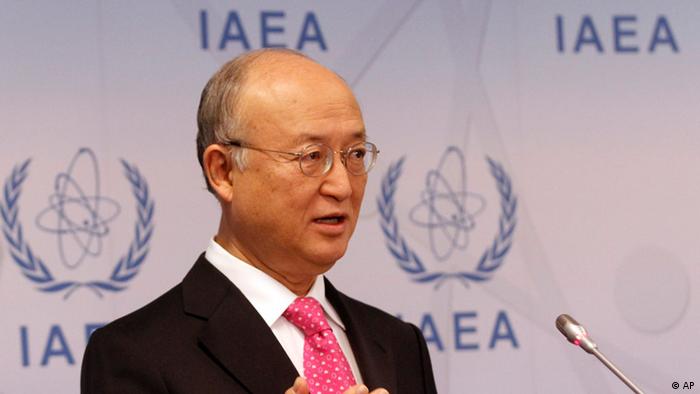 The head of the United Nations nuclear watchdog arrived in Iran early on Monday to discuss the Islamic Republic's controversial atomic program, ahead of a two-day summit of world powers in Baghdad aimed at making progress toward a negotiated solution of the dispute.

"There has been good progress during the recent rounds of discussion between Iran and the IAEA," Amano said, referring to two days of talks last week.

Change from within unlikely in Iran, experts say

Not everyone in Iran completely supports the government's leadership when it comes to the country's nuclear program. But even reformers aren't willing to voice their criticism. (31.03.2012)

"I really think this is the time to reach agreement," he added. "Nothing is certain but I stay positive."

Iranian Foreign Minister Salehi was quoted on Sunday as welcoming Amano's visit as a "good omen," calling it an opportunity to reset Tehran's strained relations with the IAEA.

The IAEA hopes to resolve disputes with Iran over the conditions under which it can inspect the Islamic Republic's nuclear sites. Western nations such as the US, Britain, France and Germany have long alleged that Iran seeks to build an atomic bomb.

But Iran maintains that the program is solely for peaceful, civilian purposes. The UN Security Council has condemned the Islamic Republic's nuclear program through six resolutions, including four with sanctions. The US and European Union ratcheted up their own sanctions this year, imposing an oil embargo and targeting Iran's central bank.

The Group of Eight (G8), which met in Camp David, Maryland over the weekend, expressed "grave concern" over Iran's atomic program and called on Tehran to "seize the opportunity" during the next round of talks in Baghdad on Wednesday.

"Our hope is that we can resolve this issue in a peaceful fashion that respects Iran's sovereignty and its rights in the international community, but also recognizes its responsibilities," US President Barack Obama told reporters during the summit.

Both Israel and the US have threatened to use military force if Iran does not comply with international demands to open its program for inspections.

Support for using military force to prevent Iran from acquiring such a weapon was at 63 percent in the United States and at least 50 percent in EU nations such as Britain, France, Germany, Spain, Italy, Poland and the Czech Republic. Only 23 percent of Russians and 30 percent of Chinese said they supported a military option.