As rescuers hunt for survivors of a massive earthquake that hit parts of Afghanistan and Pakistan, DW spoke to OCHA in Kabul about how the remoteness of the area and poor communications are hampering relief efforts. 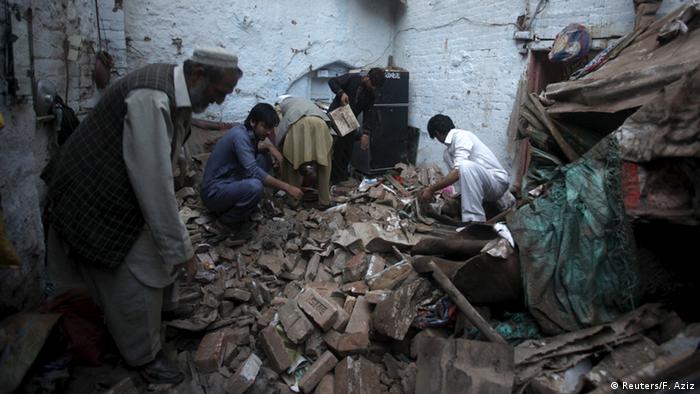 The 7.5 magnitude quake which struck northern Afghanistan and a large part of Pakistan on Monday, October 26, claimed the lives of at least 306 people over a large swath of mostly mountainous terrain.

But the number of casualties is expected to rise as rescuers reach the affected areas. There are reports of thousands spending the night outdoors under heavy rain or in near-freezing temperatures, reluctant to go back inside for fear of aftershocks.

The quake was centered 254 kilometers (158 miles) northeast of Kabul in Afghanistan's Badakhshan Province, an area where Taliban insurgents are said to have a strong presence.

Complicating rescue efforts in Afghanistan is the fact that, according to the United Nations Office for the Coordination of Humanitarian Assistance (OCHA), roads between the Afghan cities of Taloqan and Kunduz in the north and between Jalalabad in the east and the capital Kabul have been cut by landslides.

According to UNICEF, some of the areas hit by the quake are "completely inaccessible, whilst much of the rest of the affected region is difficult to reach even in ordinary circumstances."

In a DW interview, Dominic Parker, Afghanistan head of office for OCHA in Kabul, speaks about the extent of the disaster, ongoing aid and rescue operations, and says that given the low population density in affected areas the quake's impact is unlikely to be as severe as similar quakes in Haiti in 2010 or in Pakistan in 2005.

How severe was the earthquake's impact on the local population?

Dominic Parker: The scale of the geological earthquake was high. It was a 7.5 magnitude quake on the Richter scale, and approximately 220 kilometers deep. It was felt through most of Afghanistan.

The affected areas are largely remote, rural regions with low population densities. The impact in Afghanistan may therefore be much less significant than what the geological size of the earthquake would suggest. So we are unlikely to be expecting an impact in the scale of the earthquakes we have seen in Haiti in 2010 or in Pakistan in 2005.

At the moment, early assessments are underway, so we do not have a complete picture of the scale or the effect of the quake on the population. Initial reports from the local government suggested that there may have been about 76 people dead and less than 300 people injured thus far. But that's an incomplete figure.

Some geological modeling by US Geological Survey suggests that 100-1,000 is the typical range of people that may have been killed in these areas based on population figures, density. This is, however, not an assessment of current conditions on the ground. 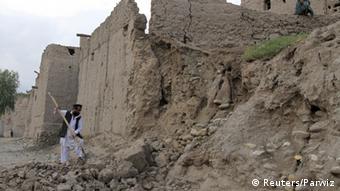 Parker: 'The main issues at the moment are focused around gaining access to the remote areas and re-establishing communications'

Due to landslides, roads are blocked from Jalabad to Kabul and Taloqan to Kunduz. How long will it take for aid and rescue teams to reach the area?

We were told that the Ministry of Public Works and the Ministry of Defense have dispatched equipment and crews to clear the landslides and restore access to the road network. One government report suggests roads have already been cleared in Takhar Province. But it hasn't been confirmed.

We must keep in mind that this particular part of Afghanistan is extremely remote. Roads are usually not of tarmac, apart from one highway from the north to the south. These are really remote and difficult conditions to get anywhere. To get the full picture is going to take days.

Do you have any information as to whether rescue teams are already on the ground?

This earthquake has had a potential impact across a large part of the country, affecting 14 provinces out of the total 34. That is almost a third of the country.

Islamabad mobilized the military to begin a rescue mission for survivors of a massive earthquake that has killed hundreds. Roads destroyed in the disaster made it difficult to reach the remote regions most affected. (27.10.2015)

A 7.5 magnitude earthquake has struck northeastern Afghanistan, sending tremors that were felt in Pakistan and India. At least 210 deaths have been reported, including 12 schoolgirls killed in a stampede. (26.10.2015)

Afghan refugee minister: Afghans should be treated on par with Syrians

Opinion: A desperate attempt to find safe areas in Afghanistan

The good times are over for Afghan asylum seekers. The ongoing refugee influx is leading German policymakers to reassess the situation in Afghanistan. But such a plan is nonsense, says DW's Florian Weigand. (26.10.2015)

So first responders are always the local community, local security forces, NGOs, government workers who live and work in the districts and provinces affected. They have certainly been responding.

Do you have any information on what those affected need the most?

The assessments are only just starting to come in, so we don't have any confirmed reports. Obviously, we can anticipate what the needs are based on previous experiences with earthquakes.

First aid treatment for those injured is clearly going to be required, along with water and food. Secondly, there will be people requiring shelter as they may fear returning to their damaged homes. Reports suggest that some non-food items may also be required.

However, I think we have to bear in mind the reality of the situation in the country and temper our expectations of what can be done and what can be known, and the speed at which things get done in such a difficult situation.

Could you tell us how the Afghan government is dealing with the situation?

Those reports will be coming in the next couple of days as information feeds back. The government has called a National Security Council meeting today to organize high-level coordination between various ministries and the international community.

Do you know whether the Afghan government has already requested foreign assistance?

My understanding is that the Afghan government has received offers of assistance from at least India and Iran. Until we know the scale of the need, it will be premature to request international assistance.

It seems that the Taliban have a significant presence in some of the areas affected by the earthquake. Do you think this will be an issue in terms of delivering aid to those areas?

The main issues at the moment are focused around gaining access to the remote areas and re-establishing communications, the lack of which has thus far hampered efforts to obtain information on the impact of the earthquake.

The epicenter struck an area of Afghanistan that is very under-developed and remote further exacerbating efforts to assess the damage.

I don't have information about areas that may or may not be under the Taliban control or what the situation is there.

But what we do know is that there are several civil society organizations that operate in districts which are under the control of Taliban forces and are also working to provide assistance, including some international NGOs.

Dominic Parker is Afghanistan head of office for the United Nations Office for the Coordination of Humanitarian Assistance (OCHA).