The UN human rights chief has criticized the country's "systematic" practice of detaining migrants for up to 90 days under harsh conditions. The Czech president has dismissed the criticism. 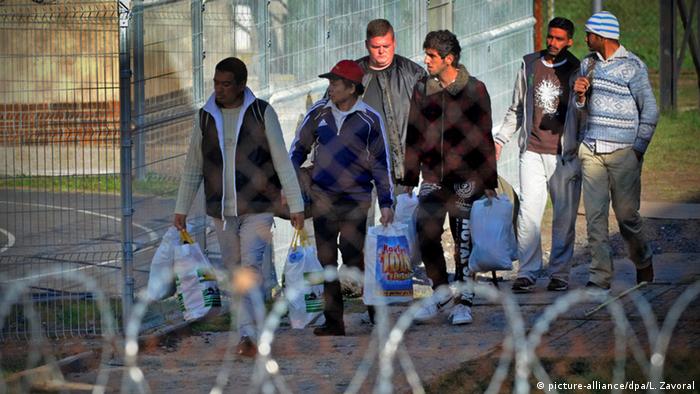 Migrants - including children - are routinely degraded and detained in unfit facilities from 40 to 90 days, the UN High Commissioner for Human Rights Zeid Ra'ad al-Hussain said in a statement given Thursday. He added that the detainees were sometimes held on their own dime, with the money by authorities through strip-searches.

The allegations increased pressure on the Czech Republic to soften its handling of refugees. Hundreds of migrant accounts have spoken of harsh procedures they were subject to upon entering the country.

The country lies off of the usual path taken by migrants heading to the north and west of Europe from its southeast. It therefore has received relatively few migrants, and critics claim that the strict policies aim to reduce that number even further.

"They appear to be an integral part of a policy by the Czech government designed to deter migrants and refugees from entering the country or staying there," al-Hussain continued.

Watchdogs and Czech Justice Minister Robert Pelikan have both called the country's detention centers worse than prison. Poor sanitary conditions and lack of medical and legal assistance are common complaints.

He cited a public petition "against immigration" started by former president Vaclav Klaus and concerming remarks made by the current Czech president, Milos Zeman.

President Zeman has since rejected the criticism. A spokesman reported that the president "stands by his opinion" and will not be swayed by outside pressure. "The president has long warned of the threat of Islamic fundamentalism," the spokesman said.

Zeman was widely criticized for comments made in a recent debate expressing worry that refugees would apply sharia law in the Czech Republic. Thieves will have their hands cut off and women's beauty will be "shrouded in burkas from head to toe," he warned.

Anti-refugee rhetoric has been vociferous in the relatively homogenous Czech Republic, but the tide of public opinion may now be turning. Ian Willoughby reports from Prague. (04.09.2015)

European Commission chief Jean-Claude Juncker has called a mini-summit for Sunday to tackle the migrant crisis in the Balkans. The meeting comes as Slovenia took drastic measures along its borders to curb the influx. (21.10.2015)