Ulterior motives seen behind China′s offer of help to US, Europe | World | Breaking news and perspectives from around the globe | DW | 14.09.2011

Ulterior motives seen behind China's offer of help to US, Europe

As both Europe and the United States continue to struggle to find solutions to the escalating debt crisis, China has positioned itself as a potential savior. But will Beijing's reward for help be a price worth paying? 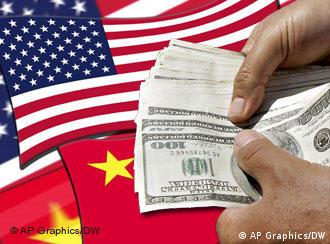 China's offer to help the US and European nations through their debt crises may on the surface appear to be just a tactic designed to extract the full market economy status which it so desires. But officials in both the US and EU are wary of what geopolitical motives may lie behind Beijing's flinging of a financial lifeline to the West.

China holds just over $3 trillion (2.2 trillion euros) in foreign currency reserves - almost 30 per cent of the global total - with 65 percent held in dollars and 26 percent in euros. As the debt crisis ravages the euro zone, Beijing has already committed to investing in Greece, Spain and Portugal while engaging in preliminary talks with Italy to provide Rome with financial assistance.

With leaders in both Europe and the United States running out of options as the debt crisis escalates, China has picked its moment to ride to the rescue and use some of its huge financial clout to offer relief - once western powers "first put their own house in order."

"China is already heavily invested in US Treasury securities and has an interest as an investor in the US having a stable economic recovery without high inflation so that the dollar is reasonably strong," Alexander Nicoll, head of the Economics and Conflict Resolution research program at the International Institute for Strategic Studies (IISS) in London, told Deutsche Welle.

"As far as Europe is concerned . . . it is acting as a prudent investor of the very large amount of money that it has to invest. It has an interest in promoting stability and that means avoiding disorderly defaults in Europe."

However, it's clear that China's willingness to increase its investments in Europe, to support ailing EU nations and expand its export drive into the US will come at a price - and it may be one which is higher that just the removal of certain restrictions to Chinese exports and investments in Europe and the US.

"The Chinese have tried a few times to use their financial leverage to get concessions from Washington in regard to limitations on access to technology and even the American support for Taiwan," Jonathan Holslag, head of research at the Brussels Institute of Contemporary China Studies, told Deutsche Welle.

"That has not really worked and I think that Beijing has come to appreciate that pursuing financial power politics toward the US will backfire."

"Europe is different," he added. "Here we have a loose bunch of countries which can be influenced more easily. Their bureaucrats generally lack the sense of realism to appraise the political impact of changes in the economic balance of power."

Holslag believes that Beijing's assistance at this time of financial turmoil could lead to Europe toning down its criticism of China's human rights record, signs of which have already been seen in some smaller EU countries.

"How can you criticize the country that helps you escape from financial mayhem?" he said. "Governments of smaller member states already show growing self-censorship, even though their societies appreciate China even less than before. Global political elites see China's rise as a financial opportunity, but people - and a growing number of companies - worry about China's influence in the long run."

Despite analysts' views that China's short game will remain focused on building up its financial power, some in the United States believe that China's long game is focused on usurping the US as the world's pre-eminent geopolitical power. Should China step in to alleviate Washington's fiscal woes, many feel that the US will then not only be beholden to Beijing but also demoted from its position as the world's only superpower.

China's pursuit of greater global influence is already causing widespread concern in the US with some Pentagon experts believing that the current financial crisis in the US has convinced China that it has been presented with an opportunity to challenge what it sees as a weakened United States.

"For the first time in their history, Beijing believes they can achieve military parity with the United States," House Armed Services Committee Chairman Buck McKeon, a Republican, said in a speech at the American Enterprise Institute think tank in Washington earlier this week, warning that China was "drunk with economic power."

"They are building stealth fighters and submarines. Their navy has grown larger than our own. They are sending warships into the territorial waters of our allies," he said. "They hack our government computers daily and intimidate our friends in the Pacific Rim."

"China keeps our admirals up at night - and for good reason."

While China is certainly using its current financial might to expand its military capability, Raffaello Pantucci, a China expert at the European Council for Foreign Relations, says it's a long way off becoming the world's only superpower.

"China's army remains in a relatively junior state, though it is catching up quickly, while the bureaucracy is still learning its way in the world and is unsure of how things can be influenced to their benefit," he told Deutsche Welle.

"China also doesn't want the responsibility of being the world's only superpower; they have too many issues at home that they need to worry about and that will take priority over anything abroad. So within that context, you might start to see China being more assertive abroad only if there is a situation that has direct implications at home."

Alexander Nicoll says that China will obviously try to pursue any political advantage it can, however he warns against overreacting."I think one should not take this too far at this stage. We should not get carried away."

Chinese Premier Wen Jiabao has said China will continue to expand its investment in the eurozone but called on countries facing a debt crisis to "put their houses in order." (14.09.2011)

The response to an attempt by a Chinese businessman to open a leisure resort in Iceland suggests growing suspicion among European experts and a potential backlash that could stifle the relationship. (12.09.2011)

The West needs to reform to deal with growing Chinese power

The experts all agree that, sooner or later, China will become the world’s largest national economy. That may not sit well with the West, but a new study says that it’s the West which will have to change. (07.06.2011)