Ukraine's former prime minister Yulia Tymoshenko has started medical treatment in Germany. She suffers from a chronic back ailment linked to injuries she sustained while in prison on controversial corruption charges. 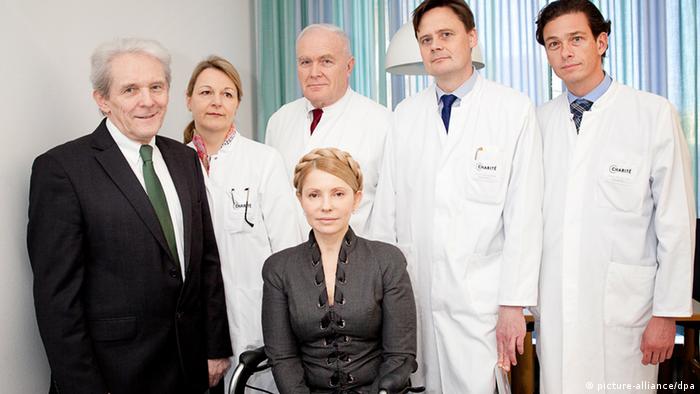 Tymoshenko received a thorough examination in Berlin's Charite hospital on Saturday, a day after arriving in the German capital.

Hospital chairman Karl Max Einhaeupl said doctors would decide on Monday whether the 53-year-old needed an operation for back pain resulting from three slipped disks she suffered more than two years ago.

He added that doctors were currently unsure how long treatment would take, but are positive Tymosenko would ultimately be able to move around again unassisted.

Although she was not suffering any paralysis, the former prime minister is said to only be able to walk using a walker, but it caused her great pain.

Tymoshenko was released from prison in Ukraine last month following the uprising that ousted President Viktor Yanukovych. Since then, she has only been seen in public in a wheelchair.

She is now considered a contender for Ukraine's presidential election on May 25.

Ukraine refused to grant Tymoshenko the right to travel to Germany for treatment during her incarceration. She also turned down an operation and injections, saying she did not trust the former Ukrainian authorities

Einhaeupl said doctors from the Charite clinic, who visited her in prison, found their hands "were tied severely in treatment."