Ukraine war: Izium bodies show signs of torture and execution | Europe | News and current affairs from around the continent | DW | 18.09.2022

Over 400 people are being recovered from shallow graves outside the town of Izium, Ukraine. DW's Emmanuelle Chaze visited the horrific scene and spoke to investigators, who believe war crimes took place there. 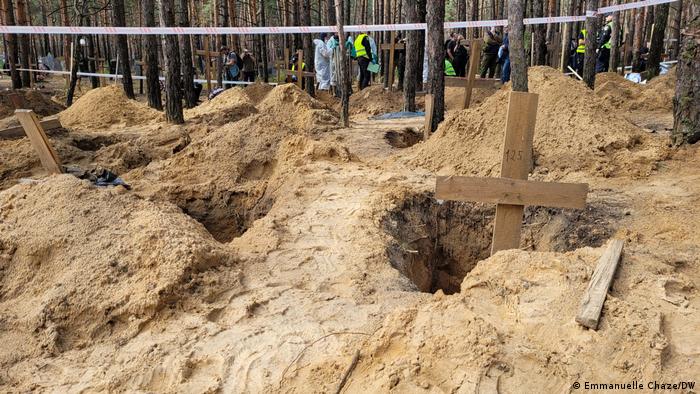 Most of the bodies found show signs of violence

The forest is located in the outskirts of Izium, a pleasant, flat pine forest where the city's cemetery is located, in this town in the Kharkiv region of Ukraine. But even before entering it, something unusual is noticeable: Lumps of sandy soil form countless dunes among the trees. Two big trucks with the number 200 sprayed onto their sides are parked on the dirt track leading to it. The number 200 is military jargon for dead bodies.

It's only when walking along the forest's path that the extent of the horror becomes clear. Each of the little dunes is a dug-out grave: methodically emptied rectangles of various sizes, where until only a few hours earlier human remains had been buried.

This is a site of sheer horror, of a mass burial of over 400 people who died violent deaths under Russian occupation in eastern Ukraine. Dozens of bodies have already been uncovered and moved to a makeshift morgue for further examination. But preliminary conclusions are grim: Most of the corpses show signs of torture.

Forensics have enlisted the help of firefighters to recover the human remains. "My task is to dig out the bodies, before forensics can establish what happen to them," one of them, Andreiy Vladimirovich Sergienko, told DW. "We then place the bodies in bags and transport them in a morgue. I feel horrible. This is a horrible moment in my life, and the first such experience in all of my five years of service."

"Psychologically, I think we will need some help in the future," he added. "Because in any case it will be imprinted on our psyche forever. There are no names on the graves, no names, only numbers. 418. 418 people buried, can you imagine?" 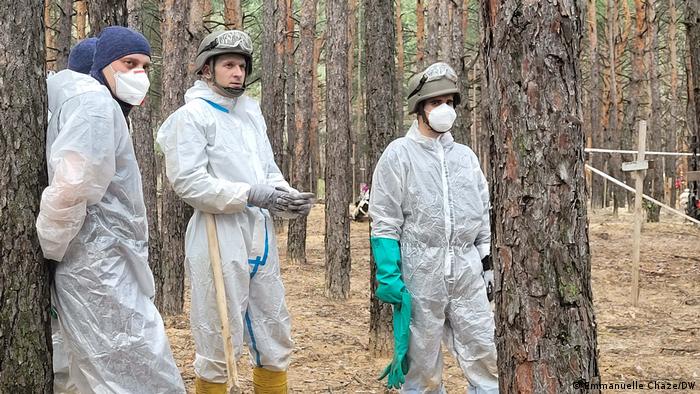 Some investigators say they will likely need psychological help

Signs of torture and execution

All around Andreiy, fresh graves are unearthed in the loose soil. When a body is successfully extracted, diggers and forensic workers take a moment to stand in silence as a mark of respect for the dead. In a surreal scene, due to the number of corpses being uncovered, several forensic experts give their conclusions at the same time, which are written down by police officers. This grim litany echoes through the forest. The only other sound comes from the flies that fester on the bodies, from the clicks of the cameras, and from artillery fire, as the war rages on only a few hundred meters away.

In front of a small group of journalists, an official dressed in white protective gear crouches over a body that has just been recovered. He unfastens its clothes, looking for anything in the pockets that could facilitate its identification.

He then proceeds to slowly enumerate his preliminary conclusions: "The body is that of a male, in his eighties. His hands are tied in the back, his head covered with a jacket. His testicles are crushed, his inner thighs bear traces of torture. He received a violent blow on the head, from behind, probably with a sharp object, like a knife." More gruesome details emerge, then the expert takes off his gloves and sits on the truck of a collapsed tree, refusing to comment on the gruesome discovery any further. 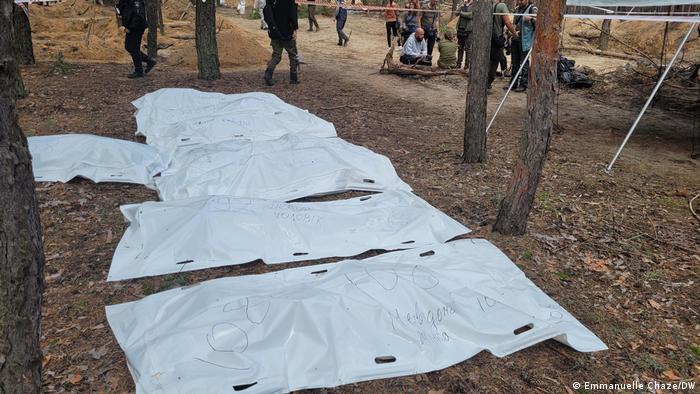 Most of the bodies are believed to be local residents, as well as some soldiers

Collecting evidence from the scene

According to Ukrainian war crimes prosecutors on the scene, most of the people killed were local residents. "Some of them could already be identified, but because their deaths occurred around six months ago, other corpses are in such a state of decomposition that it is difficult to draw any conclusions," war crimes prosecutor Volodymyr Lymar, told DW. "This will require additional DNA tests to be carried out, including comparative DNA with relatives. What we can already establish though are signs of violent deaths. Some bodies show signs of possible torture."

Among the bodies found were those of 17 Ukrainian servicemen in a mass grave, their hands tied, and indications that they were all killed at close range.

In light of the atrocities being uncovered daily in newly liberated territories, an additional thousand police officers and first responders have been deployed to the Kharkiv region, tasked with documenting evidence and collecting testimonies, with the hope that the perpetrators will be brought to justice.

For the region of Kharkiv alone, prosecutor Lymar says, "more than 4,000 criminal proceedings have already been opened regarding war crimes committed by servicemen of the Russian Federation. I will not tell you the exact number because it is constantly evolving: It increases by the minute."

The General Prosecutor Office of Ukraine has already opened over 32,000 cases of possible war crimes in the whole of Ukraine, and authorities say they are grateful for the foreign help coming in the form of international teams of experts and material support to carry out the investigations.

Berlin is investigating war crimes committed by Russian soldiers in Ukraine. Witness accounts by Ukrainian refugees are crucial, regardless of whether the perpetrators will eventually be tried in Germany or elsewhere.