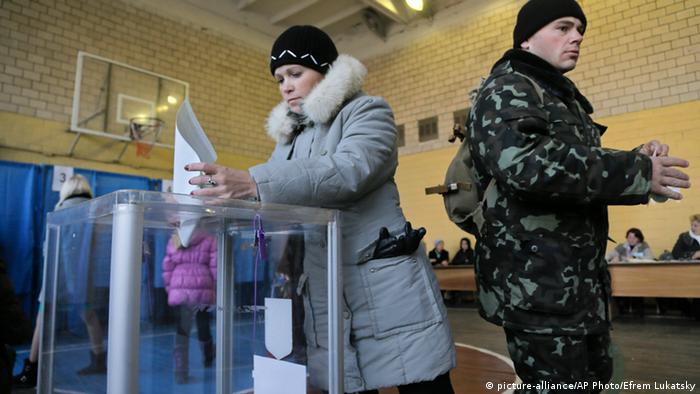 Ukrainians cast their ballots on Sunday in an election that will likely bolster pro-Western and nationalist political parties, moving Kyiv even further out of Russia's political orbit. The polls will likely give President Petro Poroshenko the power needed to end the bloody conflict with pro-Russian separatists in the country's east.

The parliamentary elections are the first since the ouster of Russia-friendly president Viktor Yanukovych following weeks of pro-EU protests last winter. The new parliament is expected to be dominated by supporters of Yanukovych's successor, pro-Western Petro Poroshenko, who is keen to pursue his peace plan in eastern Ukraine and forge closer ties with Europe.

Poroshenko called for elections in May to sweep the remaining Yanukovych loyalists out of parliament, and a pro-Western majority in the assembly would enable him to carry out his agenda and break with the Soviet past.

"Without such a majority in parliament, the president's program … will simply remain on paper," Poroshenko said.

According to polls, the new 450-seat assembly will likely be dominated by pro-Europe parties, including Poroshenko's political bloc - which consists of the president's Solidarity Party and the Udar Party led by Kyiv mayor Vitaly Klitschko.

"You will see, this will be an entirely new parliament," Poroshenko said in a televised address on Saturday, adding that the assembly to lead for the next five years should be "reforming, not corrupt, pro-Ukrainian and pro-European, not pro-Soviet."

Highlighting Ukraine's move toward the West, the Communist Party may fail to gain representation in parliament for the first time since the Soviet era.

Truce with Putin in the spotlight

The elections will also serve to reflect Ukrainian sentiment on Poroshenko's handling of peace negotiations with pro-Russian separatists in the country's eastern Donbass region. Violence between rebels and Ukrainian security forces broke out in the region shortly after Russia annexed the Crimean Peninsula in March. Since then at least 3,700 people have been killed.

A shaky ceasefire has been in place since September, and Poroshenko is considering offering the separatists limited self rule in return for peace, but his plans have met with opposition from nationalist Ukrainian parties who reject talks with Russia and whom are expected to perform well in Sunday's elections.

Poroshenko, however, is intent on pursuing his peace plan. "No criticism, no matter how acute and painful, will stop me from finding a peaceful way out of the current situation," he said.

Voting in the conflict zone

Election turnout is expected to be very low in conflict-ridden parts of eastern Ukraine, Yanukovych's former support base, and there are fears residents that live there won't have their voices heard.

"The concern of whether this will be a free but also fair election, that is definitely one of the issues we are looking at," said Kent Harstedt, a coordinator for the Organization for Security and Cooperation in Europe Parliamentary Assembly's observer mission.

As a result of the conflict, 27 of the parliament seats in fighting areas won't be filled. According to officials, about half of the district election commissions around rebel-held Luhansk and Donetsk will remain closed on Sunday because of security concerns, and police have warned people to be alert to possible unrest around polling stations.

The elections will also be the first in which Ukraine's Russian speakers will have no separate representation in parliament. Nearly 5 million of the nation's Russian speakers live in occupied Crimea or in separatist-held parts of eastern Ukraine that will boycott the election.

With huge a huge military presence in parts of the country, Ukraine is holding its first election in wartime. Observer Tana de Zulueta tells DW about the effects this will have on the poll. (26.10.2014)