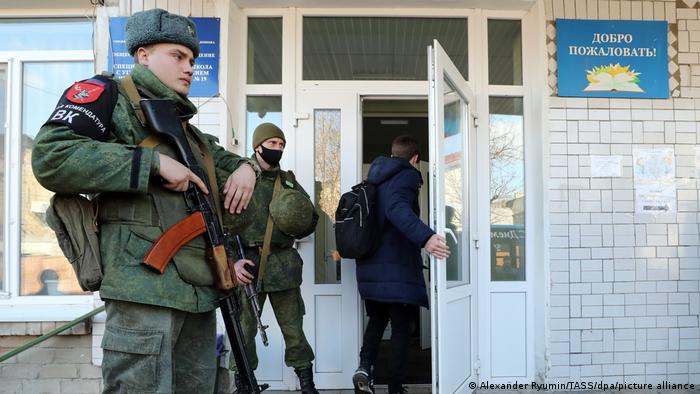 Britain expressed doubts on Thursday over Russia's ability to implement what President Vladimir Putin called a "partial mobilization" of 300,000 reservists for the war against Ukraine.

The skepticism has been fueled by a backlash expressed by some citizens in response to Putin's order.

Despite Russia's laws on dissent, protesters took to the streets in cities across the country. Nearly 1,200 Russians were arrested in anti-war protests in cities such as Moscow and St. Petersburg, according to the independent Russian human rights group OVD-Info.

"Russia is likely to struggle with the logistical and administrative challenges of even mustering the 300,000 personnel," the British Ministry of Defence said in its daily update regarding the war in Ukraine.

"It will probably attempt to stand up new formations with many of these troops, which are unlikely to be combat effective for months," it added.

The ministry views the partial mobilization as a sign of desperation from Moscow. "The move is effectively an admission that Russia has exhausted its supply of willing volunteers to fight in Ukraine."

"Even this limited mobilization is likely to be highly unpopular with parts of the Russian population. Putin is accepting considerable political risk in the hope of generating much needed combat power," it said.

Meanwhile, the Institute for the Study of War, a Washington-based think tank, wrote in an assessment that Russia's partial mobilization "will not deprive Ukraine of the opportunity to liberate more of its occupied territory into and through the winter."

The institute added that the partial mobilization will not generate significant usable Russian combat power for months.

Military expert Mick Ryan, a retired Australian army major general, wrote on Twitter that Russian troops have been deployed in combat in Ukraine for almost eight months, which is more than the usual three to four months.

"This is an exhausted force which needs rotation. Such rotation was impossible without this partial mobilization," Ryan wrote. So, this is more about rotation and replacements rather that building some huge new offensive capability, he suggested.

Here's a roundup of other news in or concerning the war in Ukraine on September 22.

In his regular nightly video address, Ukrainian President Volodymyr Zelenskyy called on Russians to resist Putin's announcement of "partial mobilization," saying that 55,000 Russian soldiers had died since the beginning of Moscow's invasion of Ukraine.

"Want more? No? Then protest. Fight back. Run away. Or surrender" to the Ukrainian army, Zelenskyy said.

"You are already complicit in all these crimes, murders and torture of Ukrainians. Because you were silent. Because you are silent," he added.

Putin's order has sparked protests in several cities across Russia, while one-way flights out of the country were quickly selling out with skyrocketing prices as many Russians sought to leave the country.

Russia cracks down on protests against mobilization

NATO says it will never recognize 'sham referendums' in Ukraine

NATO condemned Moscow's plans to hold so-called "referendums" in Russian-occupied regions of Ukraine and called on all countries to reject what it called "Russia's blatant attempts at territorial conquest".

"Sham referenda in the Donetsk, Luhansk, Zaporizhzhia and Kherson regions of Ukraine have no legitimacy and will be a blatant violation of the UN Charter. NATO allies will not recognize their illegal and illegitimate annexation. These lands are Ukraine," NATO said in a statement.

On Tuesday, Moscow said four largely Russian-held regions in eastern and southern Ukraine would vote on joining Russia in the coming days.

US Secretary of State Antony Blinken said at a UN Security Council meeting that "every Council member should send a clear message that these reckless nuclear threats must stop immediately."

Blinken listed several allegations of war crimes and other atrocities committed during the course of Russia's invasion of Ukraine.

Blinken called on countries to hold Russia accountable and said that the "international order we've gathered here to uphold is being shredded before our eyes."

"We cannot — and will not — let President Putin get away with it," Blinken added. The top US diplomat said it was critical to show that "no nation can redraw the borders of another by force."

Russian Foreign Minister Sergey Lavrov rejected the accusations at the session, saying that the "US and their allies with the connivance of international human rights organizations have been covering the crimes of the Kyiv regime."

UK, Poland and Ukraine will develop their trilateral co-operation including by strengthening the defense capabilities of the three countries and the NATO's eastern flank, according to a joint statement published by their foreign ministers.

The foreign ministers of the three countries, who met in New York for the UN General Assembly, also agreed to plans to support Ukraine long term.

"Rather, this reaction from Putin to Ukraine's successes spurs us on to continue to support Ukraine and send this clear signal," Lambrecht said.

The comments came in Berlin after a meeting with her French counterpart Sebastien Lecornu.

For his part, Lecronu said France would also continue its support for Ukraine in terms of arms and training.

Hungarian Prime Minister Viktor Orban wants the European Union to lift the sanctions it imposed on Russia and is demanding it is done before the end of the year.

The EU brought in the sanctions in response to Russia's invasion of Ukraine and has gradually tightened the screw since the beginning of the conflict on February 24.

The daily newspaper Magyar Nemzet quoted Orban as saying the sanctions, and the subsequent economic consequences, were "forced upon the Europeans by the Brussels bureaucrats."

"The sanctions are causing economic problems, the energy crisis and inflation," he added.

Orban has managed to maintain good relations with Moscow even in the wake of the war.

Hungary has gained an exemption from the oil embargo placed on Russia to help Budapest ease its economic worries over a shortage.

Finland has reported more traffic than usual at its border with Russia, the border guard in the region announced on Thursday.

According to the head of international affairs at the Finnish Border Guard, Matti Pitkaniitty, a total of 4,824 Russians arrived across the border in Finland on Wednesday. On the same day the previous week, there were 3,133, he said.

Meanwhile, Foreign Minister Pekka Haavisto said that Finland would find its own solution to the issue of Russian tourist visas.

"Finland does not want to become a transit country for Schengen visas issued by other countries," Haavisto said on Wednesday evening, according to public broadcaster Yle. "There is no moral justification for Russian holidays to continue as they are."

Russia's planned "referendums" in occupied Ukrainian territories threatens to "deepen instability," the Turkish Foreign Ministry said in a statement, adding the ballots are "illegitimate" and "will not be recognized by the international community."

Actions other than this will "complicate efforts to revitalize the diplomatic process," it added.

Four Russian-occupied regions in Ukraine plan to hold so-called referendums on joining the Russian Federation as soon as Friday.

Just as it did with the Crimean annexation in 2014, Russia is making a point of appearing not to be involved by using the referendums to suggest a hands off approach. But will this strategy succeed in the face of international derision? DW explored the Kremlin's strategy here.

Questions have arisen over Germany's support for Ukraine ever since Russia invaded in February. Ukraine needs modern, Western tanks to continue retaking Russian-occupied territory, according to military experts and there are calls for Germany to forge a coalition in Europe to deliver them.