Three Ukrainian soldiers have been killed and eight wounded in the past day, according to the country's military. Kyiv has accused pro-Russian separatists of violating a ceasefire earlier this week. 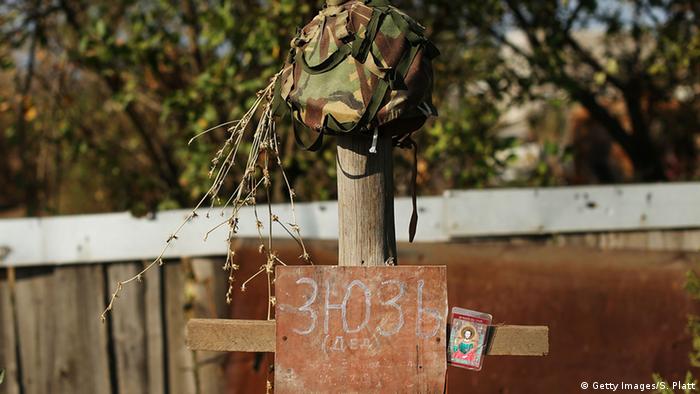 Andriy Lysenko, spokesman for the Ukrainian military, said on Thursday that three soldiers had been killed in attacks by pro-Russian militants in the past 24 hours.

"We lost three soldiers and another eight were wounded in the past 24 hours," said Lysenko, adding there had been 22 breaches of the truce since a ceasefire - which began with a "Day of Silence" on Tuesday - was introduced.

"Terrorists are violating agreements and continuing to fire on positions of the Ukrainian military and civilians. Tanks and artillery were used, but our forces did not respond."

There had been previous reports indicating that the ceasefire between government forces and rebels in the east of the country had largely been holding.

Lysenko said this meant that the first point in a September peace plan agreed in the Belarusian capital, Minsk, had not been fulfilled.

In the main rebel stronghold of Donetsk, city authorities said the night had "passed without large bombardments." In the nearby village of Tonenke, a Ukrainian military unit said the situation was calm.

In the nearby village of Tonenke, the AFP news agency reported that Ukrainian military unit also said the situation was calm.

The ceasefire earlier this week was introduced in the hope of ending an eight-month conflict which, according to UN figures, has claimed at least 4,300 lives and displaced nearly a million people.

The two sides - along with monitors from Russian and the EU - are still trying to organize comprehensive peace talks.

Negotiations planned in the Belarusian capital, Minsk, on Tuesday were delayed. Russia on Thursday said it was eager to convene another round of talks, but Kyiv has said it will not meet representatives of either Moscow or the separatists in Donetsk and Luhansk until the ceasefire is fully observed.