Four abducted observers from the Organization for Security and Cooperation in Europe have been freed by pro-Russian rebels in eastern Ukraine. Another team of four observers is still being held hostage. 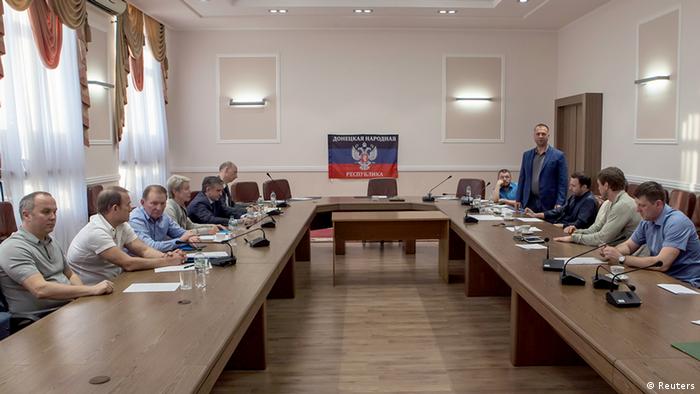 Pro-Russian separatists in south-eastern Ukraine early on Friday released four out of eight international observers, captured over a month ago, according to the Organization for the Security and Cooperation in Europe (OSCE) team in Kyiv.

The four observers were brought by heavily armed rebels to a hotel in downtown Donetsk, where they were handed over to their colleagues. The city, along with several others in the regions, declared independence from Kyiv after a disputed referendum.

Speaking to reporters, the self-styled "prime minister" of the self-proclaimed Republic of Donetsk, Alexander Borodai, said the observers were freed without conditions and identified them as nationals of Denmark, Turkey, Switzerland and Estonia.

Mark Etherington, the senior OSCE mediator in Ukraine, said the mission was "profoundly grateful" to all who facilitated the release of the hostages. "We are still very worried about the fate of four other colleagues," he added. There was no information given about the other team of observers.

The Vienna-based organization is a key security and rights body, tasked with monitoring an agreement drafted in Switzerland in April to de-escalate the crisis in Ukraine that has pitted separatist rebels against the new government in Kyiv.

The observers' release was made hours before a ceasefire between rebels and the government is due to expire. The ceasefire has, however, been marred by a number of violations, including the downing of a Ukrainian helicopter on Tuesday, killing all nine people on board.

Securing the release of the OSCE hostages has been a part of peace negotiations between the Kyiv government, OSCE, Russia and rebel leaders.