The Ukrainian parliament has voted in favor of the cabinet nominations put forth by protest leaders on Wednesday. The installment of an interim government came amid tensions over Ukraine's deep ties with Russia. 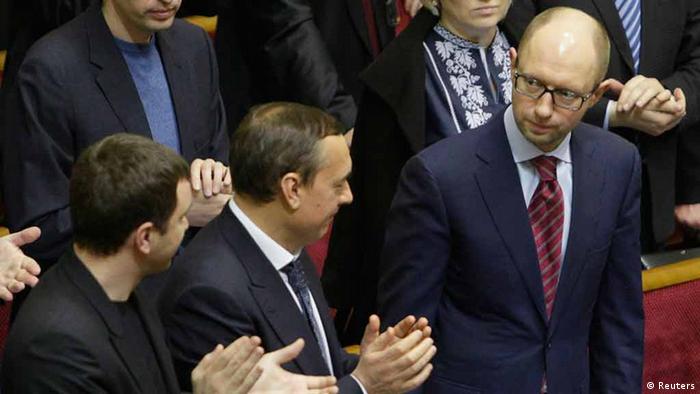 On Thursday, Ukrainian lawmakers approved a new cabinet to lead the country until May 25 elections. A council made of representatives from the pro-EU movement that toppled President Viktor Yanukovych's government proposed the nominations during a ceremony on Independence Square the night before.

Ahead of his official appointment, Yatsenyuk said the poor state of Ukraine's economy would require "extraordinarily unpopular measures."

"Seventy billion dollars were paid out of Ukraine's financial system into off-shore accounts [over the past three years]," the new prime minister told parliament, also saying that "$37 billion of credit received had disappeared in an unknown direction."

Deposed President Yanukovych said in a statement that Ukraine's parliament "does not have a legitimate character," adding that he still considered himself "the legal head" of the country. Yanukovych's whereabouts remain unknown, however Russian media suggested on Thursday he had been given refuge in Russia. It also reported that the deposed Ukrainian president would be holding a press conference on Friday in Russia.

Heavily indebted Ukraine could face bankruptcy if it cannot clinch loans from foreign lenders. As the value of its currency, the hryvnia, fell to a new record low exchange rate of more than 11 to the US dollar on Thursday, the newly appointed interim prime minister emphasized the importance of financial help from the International Monetary Fund (IMF).

"We need immediately to sign an agreement witht the IMF," Interim Prime Ministter Yatsenyuk said. "As soon as a deal on an IMF program has been signed, money will come for our reserves and we will be able to stabilize the exchange rate."

The newly appointed finance minister, Oleksander Shlapak, later said Kyiv was seeking roughly $15 billion from the IMF. Christine Lagarde, who heads the Washington-based organization, confirmed the request and said the IMF would send a team to Kyiv soon.

Both the EU and the US have expressed a willingness to back economic packages for Ukraine, contingent upon the installment of a new government. On Wednesday, US Secretary of State John Kerry said Washington was considering $1 billion in aid to the eastern European country.

Meanwhile, on Thursday, US Defense Secretary Chuck Hagel warned Russia to act with caution. The comment came a day after Russian President Vladimir Putin ordered a military drill to be carried out in the country's vast western region, part of which borders Ukraine. The move raised fears in the West and in Kyiv that Russia would infringe on Ukraine's sovereignty.

"We expect other nations to respect Ukraine's sovereignty and avoid provocative actions," Hagel said in Brussels, where he was attending a two-day NATO conference. "That's why I am closely watching Russia's military exercises along the Ukrainian border."

"I expect Russia to be transparent about these activities and I urge them not to take any steps which could be misinterpreted or lead to miscalculation during a very delicate time, a time of great tension," Hagel added.

The message echoed a similar statement given by US Secretary of State John Kerry on Wednesday, who urged leaders to avoid "Cold War" tensions.

Germany Defense Minister Ursula von der Leyen had also emphasized the importance for both sides to hold the lines of communication open despite disagreement.

"One thing is very clear: it is not only in the interest of Germany, but of NATO and Russia, too, that Ukraine finds its way back to stability," von der Leyen said at the NATO conference on Wednesday. "The country must not fall apart. Russia needs to be involved, there won't be a solution without Russia."

Turmoil in Crimea continued on Thursday with the storming of government buildings in the capital city by pro-Russia supporters and, later, with the announcement that it would hold a referendum on May 25 to determine its status.

Tensions between pro- and anti-Russian groups in Crimea# further escalated on Thursday when armed gunmen took over the regional government headquarters and parliament in the capital city of Simferopol. They then raised a Russian flag over the buildings.

On Wednesday, over 10 thousands protesters held counter rallies in Crimea, which ended in a violent altercations between the pro-Ukrainian groups - made up mainly of ethnic Tartars - and the pro-Russian supporters.

Earlier in the day, Ukraine's interim president, Oleksandr Turchynov, warned the Russian navy in Crimea - which has a large pro-Russian population - to keep its troops on its own bases. Russia's Black Sea fleet is based in the Crimean city of Sevastopol.

"Any troop movements will be considered a military aggression," Turchynov told the Ukrainian parliament.

Russia has put its army on alert. Although experts doubt Russia will intervene militarily in Ukraine, they agree the relations between the two countries are difficult at best. (26.02.2014)