UK students stripped of visas over cheating accusations | Europe | News and current affairs from around the continent | DW | 12.06.2019

Around 34,000 international students were plunged into illegality after being accused of cheating on an English language test. Some gave up and returned to their home countries. Others found themselves stuck in Britain. When Jaspal Nagpal* started a course at Glyndwr University five years ago, he was optimistic. After studying tourism, he had planned to return to India to work in the travel business with his family and hoped an accounting course would set him up for success.

Instead he was thrust into a years-long nightmare. After a few months of study, he was stripped of his visa and university place. Since then, he's been locked in a lengthy and expensive legal battle, while trapped in limbo as an effective illegal immigrant without the right to live, work or study in the UK.

Jaspal is one of around 34,000 people stripped of their status by the Home Office after being accused of cheating in TOEIC exams, an English language test frequently sat by international students. Since they were accused in 2014, thousands of students have protested their innocence, saying the evidence against them was inadequate. But the case has only recently received serious scrutiny.

"I haven't been home for eight years," Jaspal told DW. "I can't leave the UK — I have to stay here to clear my name. But here, I can't do anything. I had the intention to run my business, but now I don't know how I'm going to survive for another day."

Jaspal's nightmare began in 2014, when a BBC investigation reported evidence of systematic cheating at English language test centers in the UK. In response, the Home Office, the UK's interior ministry, suspended the license of assessment firm ETS and demanded it investigate.

Their reassessments used voice recognition software and human review to attempt to find who had cheated and drew a remarkable conclusion: 97% of a total 58,459 tests were "questionable." Of these, 33,663 tests were declared invalid. The university places and visas of all were revoked.

But serious doubts have been raised about the results. Migrant Voice, a non-profit group advocating for the students, believes the method of assessing cheating was inadequate, potentially smearing thousands of innocent people. It says the Home Office "failed to scrutinize" ETS evidence, and accepted it at face value despite significant flaws in the data.

"Thousands of people have been criminalized and their lives torn apart on the basis of fundamentally flawed evidence," Nazek Ramadan, the organization's director, said.

A National Audit Office (NAO) investigation confirmed the scale of the potential injustice in a report published in mid-May. It found 25,115 people flagged as cheats in TOEIC exams have been subjected to Home Office enforcement action, including 2,468 enforced removals, while at least 11,356 people have left the UK. 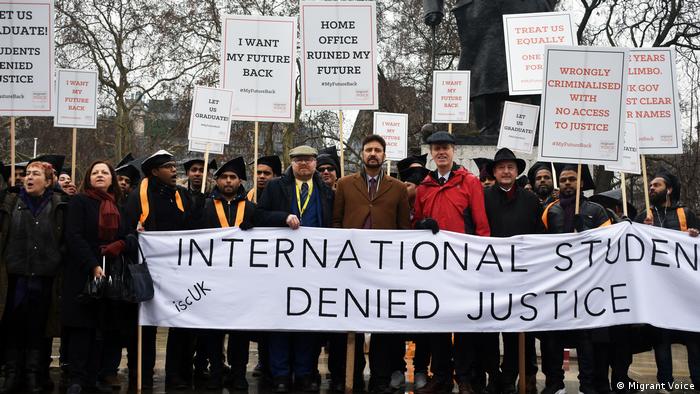 The massive cheating accusations have not got much scrutiny until now

More continue to protest their innocence: Some 12,500 who took the test went to first-tier tribunal, and 7,467 have now been granted leave to remain. While it stresses that cheating certainly did occur — an assessment the Home Office reiterated in its response to DW — the NAO said the Home Office's response carried with it the possibility that people may have been branded cheats and punished wrongly without a chance to clear their names.

What the NAO report doesn't capture is the impact of the saga on those who have been accused.

Under the UK government's hostile environment policy, migrants with irregular status are prevented from working, renting accommodation, accessing healthcare and using banking services, among other essential activities. They may also be placed in immigration detention — a fate Migrant Voice believes has affected more than 1,500 accused students.

Mazhar Majrul Islam is feeling the impact of the restrictions sharply. The former student of business and finance is currently living with a friend in London, but it's temporary. He cannot work, has no money, and nothing to occupy his time aside from reporting for appointments to immigration enforcement.

"I wake up in the morning and I don't know how I'm going to get through the day," he said. "It's two weeks here, three there, then the next one. I have to talk to my friends and hope they keep supporting me."

Mazhar believes going back to Bangladesh would mean starting from scratch, marred by a fraud accusation and facing hostility from the community. He is desperate to clear his name. "I've nothing left," he said. "I've only two options — either suicide or living like this."

While Mazhar's father gave him money for two years after the accusation, he's now told his son he must be exonerated.

Jo* has a similar story. She discovered she had been accused of cheating four years after she took the test — despite having secured two qualifications since taking it — when she was refused a work visa in 2016. Her brother has told her she must clear her name. She has been unable to tell her elderly father in Bangladesh about the situation.

"Always he's asking me: 'When will a decision come through?'" she said. It makes me so upset. I am missing my dad. It's been eight years."

Jo depends on the support of others to avoid destitution. "I have not a single thing," she says. "I have no accommodation, no food, I cannot work. Thank goodness I have a strong church family. Without them, I'm nothing. It makes me feel like a child."

Now though, Jo says she is beginning to feel hope.

Campaigners, students and politicians are pushing for new scrutiny of the English language test accusations. They believe the NAO report is a crucial step and are calling for the chance for students to clear their names by retaking the test as well as a public apology and compensation. So far, the only route to appeal has been individual court cases.

Still, for many of those affected the promise is bittersweet. Jaspal is one of many suffering from anxiety and depression after watching his life fall apart. Though he speaks perfect English, he worries his deteriorating mental health could jeopardize an examination re-sit.

"It's like we have to keep proving ourselves — like we are the criminals," he said. "Really, I don't have any feelings left now. Everything is dead from the inside."

*Names have been changed.

Nigerian middle and upper classes increasingly speak English with their children. Linguists and writers worry about the survival of native languages, especially in the south. (14.05.2019)

Germany's top court has ruled that selecting medical students based only on grades is partly unconstitutional. Until now, for most prospective German doctors, going abroad has been the only way to study medicine. (19.12.2017)

Relations between Russia and the US are on a downward spiral of sanctions and accusations. But on the 50th anniversary of the first US exchange program to the Soviet Union, its alumni have a different take on ties. (01.10.2017)

At least 19 people died and dozens have been injured in a suicide bombing at an education center in the Afghan capital. Police say the attack came as students were taking a university entrance exam. The bombing is the latest in a series of attacks in recent months.