British lawmakers have voted overwhelmingly in favor of legalizing same-sex marriage and expanding access to abortion in Northern Ireland. The changes will only come into effect if a political impasse in Belfast remains. The people of Northern Ireland will have the same abortion and same-sex marriage rights as the rest of Britain if the political deadlock continues in Belfast.

Lawmakers in the House of Commons voted on Tuesday by 332 votes to 99 on a new amendment to widen access to abortion for Northern Ireland. They also voted 383 to 73 in favor of an amendment calling for same-sex marriage to be made legal.

The amendments were included in a routine, technical piece of legislation which delays elections in Northern Ireland until at least October 21, to allow for further power-sharing talks between the two main parties in its devolved government, the Democratic Unionist Party (DUP) and Sinn Fein.

A state of flux lingers on in Belfast

The legislation will only come into effect if the Northern Irish government fails to resume operation by October 21. If it is restored before then, the Belfast assembly could yet overturn the decisions.

As it stands, the two parties that share power in Belfast, are embroiled in a long-running dispute regarding the distribution of power.

The DUP, which props up Prime Minister Theresa May's government, had been opposed to the proposals on abortion and same-sex marriage. 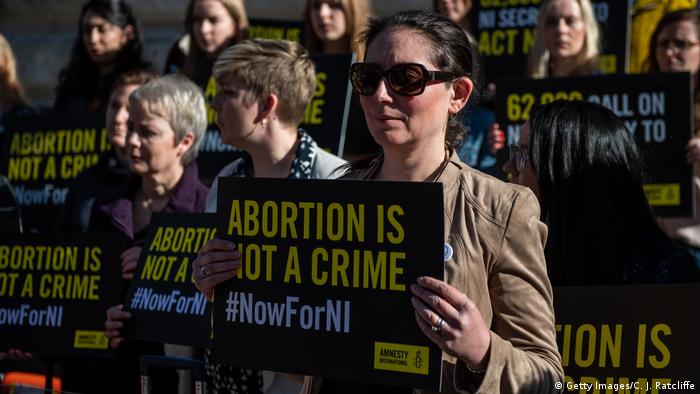 Protesters have long sought change to abortion laws in Northern Ireland. People made their case outside the Northern Ireland Office in Parliament Square, London, earlier this year

Abortion is currently illegal in Northern Ireland, even in cases of rape or incest, or when the fetus has severe defects. The only exception is when the mother's life is at risk.

The legislation must also be approved by the unelected House of Lords.

Politicians on both sides of parliament welcomed the proposed changes.

"Today we have said everyone in the UK deserves to be treated as an equal."

Conservative politician Penny Mordaunt, who has been the women and equality minister for the past year, said that the vote was "a welcome step forward".

"Parliament has agreed to address the lack of access to safe abortion in Northern Ireland. We must make sure women in every part of our UK can get the care they need," she tweeted.

However, Nigel Dodds, the DUP's leader in the House of Commons, said the vote drove "a coach and horses through the principle of devolution," and overrode the concerns of people in Northern Ireland.

Exit polls have indicated a large majority in favor of easing restrictions on divorce, more than 20 years after it was first permitted. There was also a majority for a united Ireland. (26.05.2019)

UK and Irish leaders were among hundreds of people who came out to honor the life of Lyra McKee at a funeral in Belfast. The journalist was shot dead during rioting in Northern Ireland last week. (24.04.2019)