The president of the Irish republican party Sinn Fein, Gerry Adams, has been replaced by his deputy, Mary Lou McDonald. The move marks the party's break with links to the IRA, which waged a long and bloody insurgency. 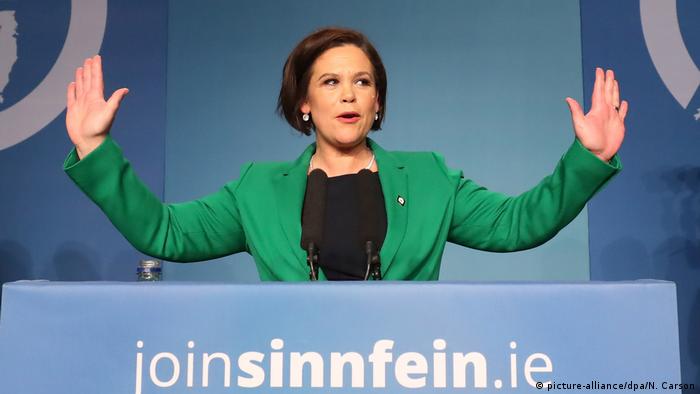 Gerry Adams, the controversial president of Ireland's Sinn Fein party, handed over the reins to his deputy Mary Lou McDonald after almost 35 years as the figurehead of the Irish republican movement.

The 48-year-old Dublin native McDonald was confirmed as the party's new president at a ceremony on Saturday. The election of a woman from a younger generation, who had no direct involvement in the 30-year Northern Irish conflict, represents a considerable break with the past for the former political wing of the Irish Republican Army (IRA).

"The war is over," McDonald told party members in a speech in which she quoted American poet and civil rights champion Maya Angelou and praised Gerry Adams as a "political giant."

"Now as a new generation takes the reins of leadership, our job is to bring innovative and modern ways of advancing our politics," she added. "Now is the time for fresh thinking and bold ideas."

At her nomination, McDonald had said, however, that "uniting this island is the best outcome for all our citizens, and it is now our task to convince our unionist friends and neighbors of that." 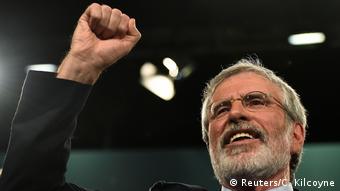 McDonald became a member of the European Parliament in 2004 and became deputy leader of Sinn Fein in 2009. She was the only lawmaker to put her name forward to succeed Adams.

Sinn Fein, which is present in parliaments both in Belfast and Dublin, wants Northern Ireland to leave the United Kingdom and become part of the Republic of Ireland. With the United Kingdom's impending departure from the European Union in 2019, both parts of the island will have to renegotiate their relationship.

Read more: Ireland's Brexit border: The devil is in the detail

McDonald takes over Sinn Fein following a series of resignations and suspensions that have posed questions about the party's professionalism. Recent surveys, however, suggest that some skeptical voters would be more willing to vote for Sinn Fein under McDonald's leadership than Adams's.

Elections in the Republic of Ireland are expected to take place within the next 12 months.

Gerry Adams: a chequered past

Although Adams sometimes defended the terrorist actions of IRA paramilitaries fighting British rule in Ireland, he has always publicly denied being a member of the group.

Despite this, Adams was interned without trial in 1972 and 1973 and arrested again in 2014 for questioning over the IRA's 1972 abduction and murder of Jean McConville, who was accused by the insurgent group of passing on information to the British army.

Adams was later released without charge owing to lack of evidence.

From rebel to peacemaker

Although Adams was a hated figure among many Protestants in Northern Ireland during the sectarian conflict there, he is also credited with convincing the IRA to disarm as part of a peace process that led to the Good Friday Agreement in 1998. Since the agreement, he has helped make the party the second-biggest political force north of the border and the third-largest party in the south.

He was elected to the British parliament as an MP for the constituency of West Belfast but never took his seat, as he refused to swear allegiance to the British head of state, Queen Elizabeth II.

"I think Guy Fawkes had the right attitude towards Westminster," he once said, referring to the famous failed Gunpowder Plot involving Fawkes to blow up the parliament in the 17th century.

Speaking last month, Adams said his decision to step down was part of a "10-year plan for the regeneration and renewal of the party."

He warned that sectarian politics in Northern Ireland had again become "very polarized at this time and the atmosphere is very toxic."