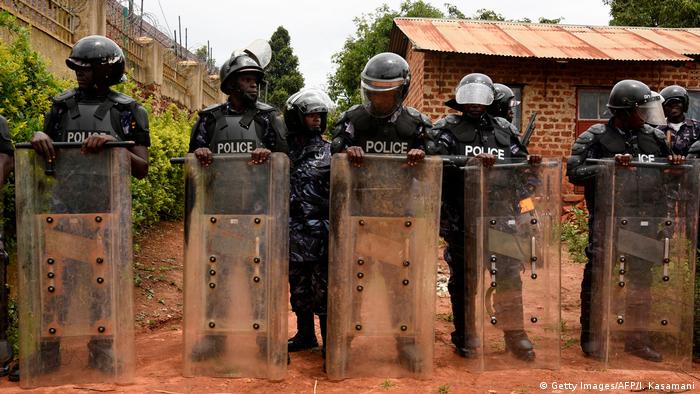 75-year-old Museveni came into power in 1986 and has kept a tight grip on it ever since. His rule was extended to a fifth term in 2016 elections that were widely dismissed as lacking transparency and being carried out in an intimidating atmosphere.

Laws that would have stopped Museveni from standing again have been dismantled. In April 2019, Uganda's supreme court ruled that scrapping the age cap of 75 years was legal, thus paving the way for Museveni to seek a sixth term in the 2021 elections.

It's not the first time laws have been changed to allow Museveni to stay on. The presidency was originally limited to two-terms but this was overturned by the courts in 2005.

Uganda, under Museveni's rule, has a long history of repression. But Museveni's "brazen crackdown on human rights has clearly escalated in recent months," said Jeffery Smith, the founding director of Vanguard Africa, a nonprofit organization that supports fair elections in Africa.

"This situation has typically played out in Uganda in the lead up to elections, but this time around the ferocity and the speed with which state violence has been unleashed should concern everyone," Smith told DW.

In October, the musician, politician and presidential hopeful Robert Kyagulanyi, better known as Bobi Wine, awoke to find police had encircled his house in order to block him from giving a concert. 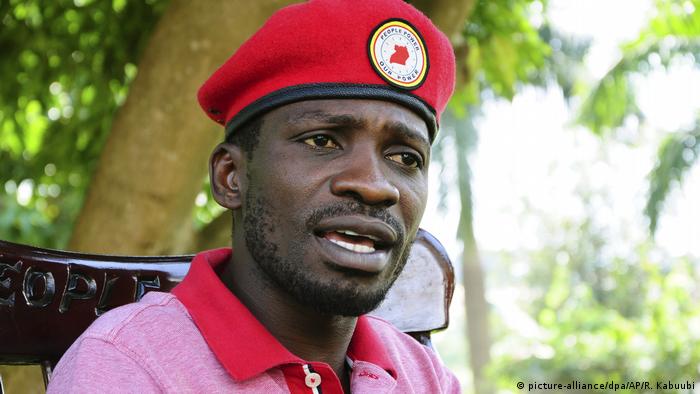 Robert Kyagulanyi, also known as Bobi Wine, is seen here wearing his signature red beret that the government has since banned

Officials said Wine had failed to comply with security and traffic plans to ensure the safety of those attending the performance – a justification they have used in the past for blocking Wine's concerts.

The musician says the police have stopped more than 100 of his concerts since he became a member of parliament in 2017.

Wine has amassed a large support base especially among young Ugandans who have been wooed by his music's caustic criticism of Museveni.

His spokesperson says the bans won't stop Wine, who in July formally declared his bid run for the 2021 presidency, from continuing to release critical songs.

"Through his music, he will tell people about the current state, politically and otherwise, and the ills that our government is doing," Bobi Wine’s spokesperson Joel Ssenyonyi told DW in Kampala. He will also use his music to talk about "what people can do as citizens to contribute to the betterment of things."

At the end of September, authorities also banned the red beret associated with Bobi Wine and his supporters – declaring it military clothing and threatening to arrest those caught wearing it.

The opposition is finding it increasingly difficult to hold rallies and meetings.

In September, police stopped a Forum for Democratic Change rally in Mbale and arrested party president Patrick Oboi Amuriat along with several other party leaders.

Anti-riot police also blocked a rally in April in Lira, firing tear gas and live bullets to disband those protesting the rally's dispersal. Former presidential candidate Kizza Besigye was escorted by police patrol cars out of the district.

The Public Order Management Act, which came into law in 2013, gives police discretionary powers to prevent the holding of public meetings, including processions and demonstrations.

Human Rights Watch, an international rights watchdog, has accused the police of using disproportionate force in doing this.

"The Ugandan government should urgently carry out fair and transparent investigations and hold accountable security forces who have used excessive force," Human Rights Watch said in a statement released earlier this month.

The government isn't just shutting opposition voices out of streets and squares, it's also blocking it online.

In August, the country's communications regulator announced that social media influencers and others with a large commercialized following must register their activities for monitoring by the state.

Authorities say the measure is necessary to immoral or prejudiced content. Critics view it as part of an escalating campaign by Museveni to suppress online dissent.

The declaration came just a week after university lecturer Stella Nyanzi was sentenced to 18 months in prison on cyber harassment charges stemming from a Facebook post criticizing Museveni.

In the same month, the Wall Street Journal announced that Ugandan police, with help from Huawei staff, had hacked into Bobi Wine's phone. Social media use is already curtailed in Uganda after the country introduced a tax on the use of popular platforms last year.

Traditional media are also feeling the squeeze as increasingly the government is specifically "targeting media for giving airtime to political opponents or critics with dissenting views," according to Human Rights Watch.

Uganda's media regulatory body has accused 13 broadcasters of violating broadcasting standards over their coverage of opposition groups and threatened to suspend the licenses of five of them. The TV and radio stations reported the arrest of Bobi Wine in April 2019, when Wine was detained by police for his participation in protests the year before.

Uganda currently ranks 125 out of 180 countries on Reporters without Border's Press Freedom Index.

"Museveni tolerates no criticism and often uses hate speech in his references to the media," Reporters without Borders finds. "The security services, which are the leading press freedom violators, often target journalists, arresting them arbitrarily and sometimes holding them incommunicado."

Last week, police in Kampala fired tear gas at a group of some 50 journalists who attempted to deliver a petition protesting police brutality against the media, detaining eight of them.

"The abuse of citizens and the targeting of dissent in Uganda is worse at this time because the Museveni regime is paranoid and it's clear that his support is waning," said Jeffery Smith

"This is what naturally occurs when you overstay your welcome, when you have been in power longer than most of your country's citizens have been alive."

The opposition is fighting back by seeking to petition the International Criminal Court (ICC) in The Hague to open a case against Museveni.

The move is being led by Kampala Mayor Erias Lukwago and opposition figure Kizza Besigye want want the ICC to try Museveni on four counts including extra judicial killings, torture and kidnappings.

"As a means of holding onto the illegitimately and illegally assumed power, Gen. Museveni and his accomplices have continuously unleashed violence and terror against the citizens of Uganda to keep them muzzled and subdued," Lukwago was reported as saying by the Ugandan news site, The Sunday Monitor.

Normally the ICC only takes up a case that has been referred by United Nations Security Council or by the government of a country that is signature to the Rome Statute governing the ICC. 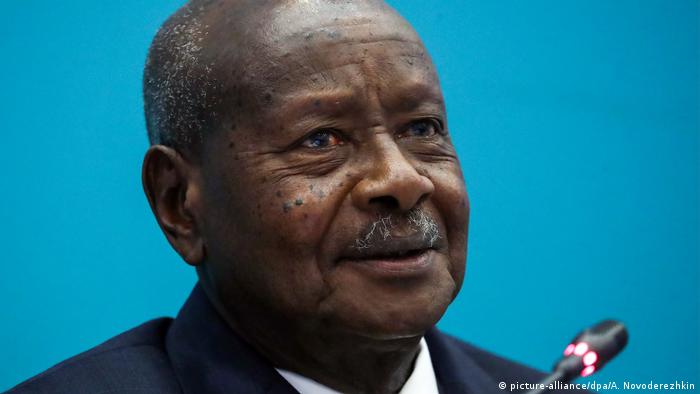 Uganda's opposition is collecting signatures in the hope that this will convince the ICC that Ugandans support the idea of prosecuting Museveni.

"We want two million Ugandans to sign the petition and then see how the [ICC] prosecutor’s office will dismiss it as just another complaint," the Sunday Monitor quotes Lukwago as saying.

The move could work, believes Ugandan law professor Daniel Ruhweza, but the petitioners need to make a strong case.

Previous attempts by other groups in the past have failed to get the ICC to investigate Museveni and other officials in his government.

Julius Mugambwa and Alex Gitta in Kampala contributed to this article.

The 37-year-old opposition figure was charged while in court to face a separate treason charge. Bobi Wine says he wants to challenge longtime President Yoweri Museveni in an upcoming election. (06.08.2019)