In an exclusive interview with DW, Ugandan politician and musician Bobi Wine explains why he has no choice but to fight for what he believes in, even at the risk of his health or life.

He is a reggae star among the young people of Uganda and an opposition politician increasingly seen as a menace by the regime of President Yoweri Museveni. Bobi Wine, whose real name is Robert Kyagulanyi Ssentamu, has been detained, badly beaten and charged with treason — or "framed", as he puts it. DW talked to Wine to find out more about his vision and plans.

DW: What is the People Power Revolution and what does it mean to Uganda?

Bobi Wine: The People Power Revolution is an initiative that seeks, first and foremost, to unite all change-seeking forces in Uganda. After that we can proceed and change our country. It is a belief in the sovereignty of the people, as indeed provided for in our constitution, right at the beginning, that all power belongs to the people. So we are reminding people of their power, of their God-given rights, but most importantly, of their ability to make use of that power they have.

How are you going to make people actually believe it?

Well, we started by opening peoples' eyes to the realities around them, about how they are being oppressed, how their illusion of freedom has to be unmasked so that they realize they are actually answerable to the leaders and yet it is supposed to be the other way around. People didn't know about the blaring injustices that are ongoingin Uganda, but right now they are all being exposed.

Why are your public appearances attracting heavy security deployment?

(laughs) You see, I'm just a musician. But at the same time, I'm a messenger of the people. So those people you see coming together around, that's not about me, it's because they see their voice reflected in me.

Is the regime afraid of you?

You and your associates were arrested and your driver was killed. Doesn't this scare you and the people around you?

Of course it scares me. Of course everybody wants to live peacefully and undisturbed. But when I think about the 32 years of oppression that we have already undergone then there is nothing to fear any more. We either decide to gain our freedom, or we will be slaves forever. So the fear does not compare to the zeal. 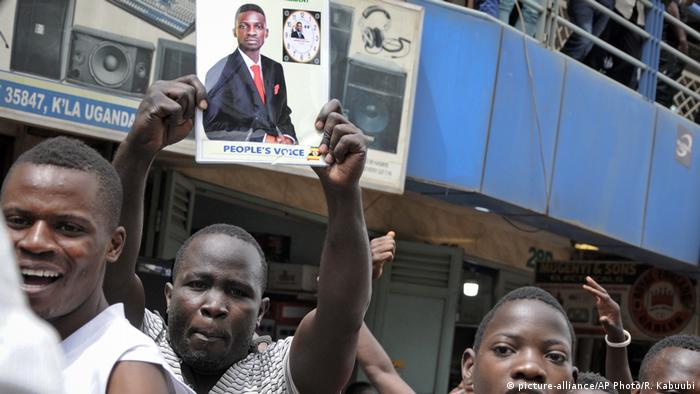 You have been charged with treason. Why?

I know that there are so many laws that they would like to quote — or, in my opinion, to misquote — to stop us, and that is why I am charged with treason. That is why they tried to frame me, to accuse me of having illegal weapons. They'll try to twist any law to try to control us. But we will be unstoppable. Martin Luther King Jr. once told us that if a law is unjust, it is not enough to only disobey that law but it becomes a duty to disobey it.

What did you mean by saying the president should remember that at one point he will be leaving power?

What is your vision for Uganda's future?

As a person I want to live in a free Uganda. But as an ideology, we are people who want to feel that we matter in our country. We want to live in a country where all of us are equal and all of us have the same opportunities. No matter your tribe, no matter who knows you, no matter which family you come from, that is the Uganda that we want: a country where you can talk about everything without being beaten. Where, even if you are a boda boda rider (motorcycle taxi), if you have all the requirements, you don't get arrested because somebody wants to extort money from you. That's the country we want, a country where citizens can feel safe. It is a wide vision for Uganda, but most importantly we want to have the freedom to imagine it, because it seems that now we are not allowed to.

Are you running for president?

I think the question of the presidency is diversionary. This should not be reduced to a single person. I've said it before and I'll say it again, that this is not about me. It's about all of us and each of us needs to play his part. Of course if there is a part for me to play I can not overlook it. But right now we need to do first things first. We need to come together, we need to realize what we are able to achieve. And then go ahead and achieve it. When we get to that bridge we shall cross it.

What is your comment on the recent split of the Forum for Democratic Change (FDC) party?

If you had a one-on-one with President Museveni, what would be your key messages?

If I were to meet the president I would need time to prepare, because I would only want to use that time to remind him of the promises that are well-documented in the books that you read. And to remind him that his concerns then when he was our age, are our concerns now too.

Do you think so far your messages are cutting across the divide?

I must emphasize that this is not just my message, it is ours, the majority of us who feel oppressed. And yes I feel that it is increasingly cutting across. There are many great people who have come before me who sent the same message. I am only adding my voice and I am sure that many will come after me. Each of us will add on until the liberation day comes.

Bobi Wine is your stage name for Robert Kyagulanyi. How is the one affecting the other?

I don't regard it as affecting, because I am the same person. However, the different characters have different roles to play. As Kyagulanyi I walk into Parliament and articulate issues. As Bobi Wine the musician, I also use the microphone to make sure that the message goes as far as possible. I think they just complement each other. They don't affect each other.

Bobi Wine is a musician and opposition politician in Uganda.

Popular politician Bobi Wine was met with a police escort and treason charges when he returned to Uganda. He was in the US for treatment of injuries he said were sustained while tortured by security forces. (20.09.2018)