Yoweri Museveni has won a sixth term as president of Uganda while his main challenger, Bobi Wine, has countered with allegations of vote-rigging. Museveni warned people not to "cause chaos." 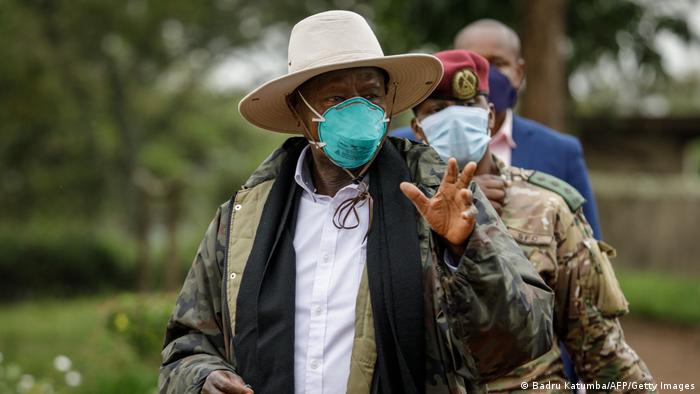 One of Africa's longest-serving leaders, Yoweri Museveni, was declared the winner of Uganda's presidential election by the country's electoral commission on Saturday.

Museveni, who first took power in 1986, won a sixth term in office with 58% of the vote while his main competitor, singer-turned-lawmaker Bobi Wine, trailed with 34%.

He said turnout was 57% of almost 18 million registered voters.

Do not 'cause chaos'

Museveni warned people in Uganda not to "cause chaos."

Wine quickly rejected the result of Thursday's vote claiming that there had been widespread fraud.

He told the Reuters news agency that this had been "the most fraudulent election in the history of Uganda."

The presidential challenger also said Friday that his home in the capital Kampala was under siege from government soldiers.

"I've tried to leave my compound and I'm being blocked by the military. They say they have orders not to let me leave," Wine told Reuters.

The army's deputy spokesman, Deo Akiiki, told Reuters that the security forces had been placed there for his own protection and were stopping him from leaving his home while assessing threats.

Meanwhile, British officials called for an investigation into concerns over the validity of the election.

"Many in Uganda and beyond have expressed concerns about the overall political climate in the run-up to the elections as well as the electoral process. It is important these concerns are raised, investigated and resolved in a peaceful, legal and constitutional manner," Britain's minister for Africa, James Duddridge said.

"We ask that all parties, including the security services, but also all of Uganda's political movements, act with restraint to ensure the peaceful resolution of disputes," he added.

The US State Department said Saturday it is "deeply troubled" by reports of election violence and voting irregularities.

"The Ugandan people turned out to vote in multiparty national elections on January 14 despite an environment of intimidation and fear," State Department spokeswoman Morgan Ortagus said in a statement.

"We are deeply troubled by the many credible reports of security force violence during the pre-election period and election irregularities during the polls," she said.

Ortagus called for "independent, credible, impartial and thorough investigations" into the reports of violence and election fraud.

The State Department is "gravely concerned by harassment of and continued threats to civil society," she added.

Wine said that he had video footage of electoral fraud which he would upload once his internet connection was returned.

The government shut down the internet the day before the election and has yet to end the blackout.

The United States and the European Union did not deploy observer teams, but the U.S. State Department’s top diplomat for Africa, Tibor Nagy, said in a tweet early on Saturday that the "electoral process has been fundamentally flawed."

The 76-year-old Museveni was allowed to extend his 35-year rule following a change to the constitution.

Wine had galvanized young Ugandans against Museveni. Three-quarters of the country's population is under 30 and many already knew the opposition candidate thanks to his songs about economic and social inequality.

Wine and other opposition candidates were often beaten or harassed, and more than 50 people were killed when security forces put down riots in November over Wine's arrest.