Ugandan opposition leader Bobi Wine has said on Twitter that the military has entered his home and "taken control".

"We are in serious trouble," he tweeted.

Kampala's police said they had boosted deployment in the neighborhood for Wine's own security.

"We are not there to arrest him and he is not under arrest," Luke Owoyesigyire, deputy spokesman for Kampala's metropolitan police said, according to Reuters news agency.

This comes just hours after Bobi Wine disputed provisional election results released on Friday, which show Ugandan President Yoweri Museveni with a commanding lead, with almost half of the ballots counted.

So far, Museveni has gained 62% of the vote while main challenger Bobi Wine is trailing with 30% with about 37% of the vote counted.

Wine, a popular musician who entered politics, claims the election had been marred by "widespread fraud."

"I am very confident that we defeated the dictator by far. I call upon all Ugandans to reject the blackmail. We have certainly won the election and we've won it by far," Wine told journalists.

He later went further at a press conference, claiming victory and calling Museveni's early lead as a "joke".

The 38-year-old musician said he had filmed proof of fraud during voting, and that he wanted a peaceful outcome to the vote.

Wine also took to Twitter late on Thursday to denounce the vote and said there had been "violence experienced across the country."

His statement, posted as the country entered the third day of a state-imposed social media blackout, contradicts the government's official account that polling was peaceful.

The capital Kampala was quiet and some businesses remained closed, while soldiers and police patrolled on foot the day after the election.

Uganda’s Electoral Commission chair, Simon Mugenyi Byabakama, congratulated Ugandans for voting peacefully and warned that "that no other person or entity is authorized to declare or announce the outcome of this Presidential election" besides the Electoral Commission.

Final results are expected to be announced on Saturday.

The United States, European Union, and the United Nations have all questioned whether the election will be free or fair.

Why is the situation tense?

Museveni, a former guerrilla commander who came to power in 1986, amended the constitution in 2019 to allow him to run for a sixth five-year term.

Wine, who became an MP in 2017, argued the long-serving leader could not offer the change that Uganda's youth demand as the East African nation grapples with high unemployment.

The pop star says his supporters will demonstrate peacefully if they believe the election has been stolen.

But before polling day, the incumbent president warned Wine to stay off the streets.

"If you use violence to protest against an election result, that is treason," Museveni said in a national address Tuesday.

Wine wore a bulletproof vest for much of the campaign.

Protests in November over one of Wine's numerous arrests by authorities turned violent, leaving 54 people dead. 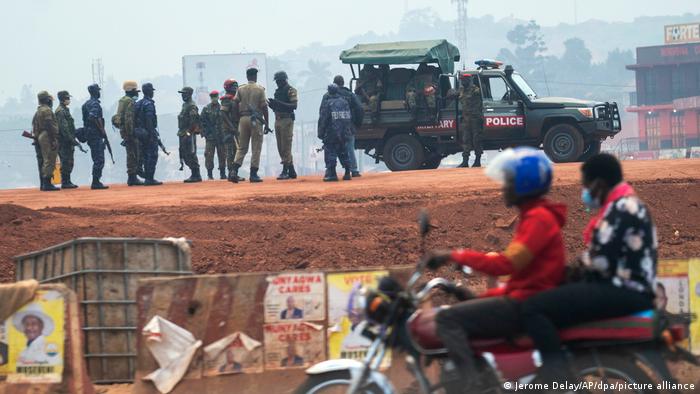 Ugandan police patrol Kampala. The elections have been marked by heavy military and police deployment

Reactions from the ground

Meanwhile, there has been relative calm in Uganda on Friday, with counting still ongoing.

"In the village, we don't have social media. The NRM people have been coming here to campaign door-to-door. Bobi Wine was popular on social media, but here on the ground, most of us don't have smartphones," she told DW.

Juliet Naiga from Kampala said these elections, compared to previous ones, were "a calm exercise, except for the internet shutdown."

However, some have said a heavy military deployment throughout the election period has made people fearful.

"You are seeing the air force is hoovering all over in the sky. People are scared, the town is closed, the streets are deserted. This partly explains that some people who may not have come to vote because of the presence of the military," said political analyst Timothy Sibasi.

This article was updated at 15:30 UTC to reflect new developments.

Campaigners have called the suspension "a witch hunt" and say it will prevent them from carrying out lifesaving work in the conservative East African country.