UAE's first official synagogue to be complete by 2022

The synagogue will be part of a multifaith complex in Abu Dhabi. The intention is to create a space for interreligious dialogue and peaceful coexistence. 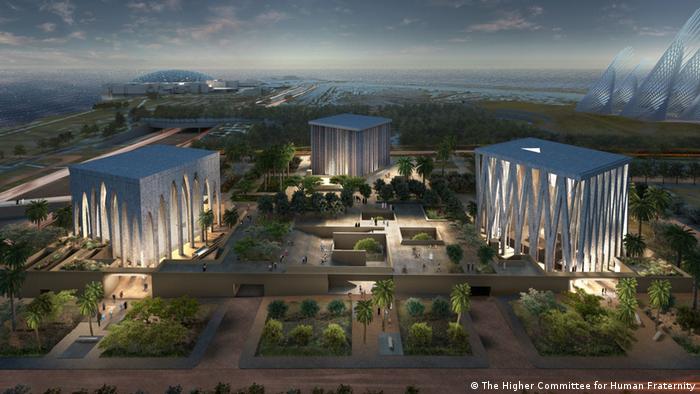 A multifaith complex that includes the United Arab Emirates' first official synagogue will be finished by 2022, the organization behind the construction said Sunday.

The church, mosque and synagogue will be part of the Abrahamic Family House in Abu Dhabi, the capital of the United Arab Emirates.

The intention to build the complex was announced in February when Pope Francis met with the Grand Imam of Al-Azhar, Sheikh Ahmed el-Tayeb, during his visit to the UAE. It was the first papal visit to the Arabian Peninsula.

"A church, mosque and synagogue will share a collective space for the first time, serving as a community for inter-religious dialogue and exchange, and nurturing the values of peaceful co-existence and acceptance among different beliefs, nationalities and cultures," the committee overseeing construction of the complex said in a statement.

Muslim UAE tries to present an image as a tolerant state supporting religious freedom and cultural diversity. However, the government accepts little dissent against the country's leadership and is criticized by human rights groups for jailing activists.

Although the synagogue will be the UAE's first, a small Jewish community of expatriates attend a house for private worship.

The UAE does not have official relations with Israel, but Israeli politicians have recently attended events in the country as part of a broader behind-the-scenes diplomatic opening between the Jewish state and several Arab states.

Other official non-Muslim places of worship in the country include Christian churches, a Hindu temple and a Sikh Gurdwara.

The Argentine pontiff has described the relationship between Jews and Christians as an "unbreakable bond." He also condemned the use of violence in the name of religion amid a series of Islamist attacks across the globe. (17.01.2016)

Pope Francis' Morocco trip is aimed at promoting moderate Islam and showing solidarity with migrants fleeing to Europe. In February, Francis visited the UAE, where he emphasized the need for interfaith dialogue. (30.03.2019)

Pope Francis traveled to the United Arab Emirates on Sunday as part of his first visit to the Arabian peninsula. The UAE's ambassador to Germany, Ali Abdulla Al Ahmed, told DW why the trip so important for the region. (01.02.2019)