Pope Francis' Morocco trip is aimed at promoting moderate Islam and showing solidarity with migrants fleeing to Europe. In February, Francis visited the UAE, where he emphasized the need for interfaith dialogue. 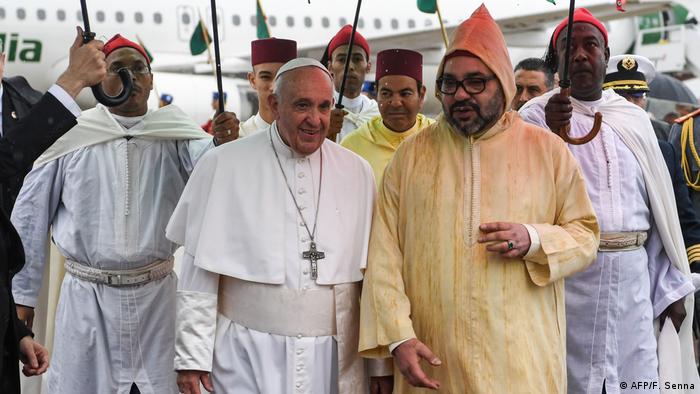 In his address to Moroccans shortly after reaching the capital, Rabat, on Saturday, Pope Francis said it was "essential to oppose fanaticism."

The "appropriate preparation of future religious guides is necessary," said the pontiff, who has put interreligious dialogue at the center of his two-day visit to the North African country, the first by a pope in 34 years.

Francis also defended "freedom of conscience" and "religious freedom" as fundamental for human dignity, and called on the faithful to "live as brothers."

The pope praised Morocco's efforts to promote an Islam that repudiates extremism. Morocco, a Sunni-Muslim kingdom of 36 million people, overhauled its religious policies following terrorist bombings in Casablanca in 2003 that killed 43 people.

The pontiff was unequivocal in his support for Middle Eastern and North African migrants and refugees who flee their war-torn countries in search of safety in Europe. Morocco has become a key departure point for African migrants trying to reach Europe.

Francis stressed that social and economic justice, and not physical barriers, is the way to resolve the migration problems.

"The issue of migration will never be resolved by raising barriers, fomenting fear of others or denying assistance to those who legitimately aspire to a better life for themselves and their families," Francis said at the welcoming ceremony.

"We know too that the consolidation of true peace comes through the pursuit of social justice, which is indispensable for correcting the economic imbalances and political unrest that have always had a major role in generating conflicts and threatening the whole of humanity," he said.

One of the highlights of the pontiff's Morocco tour is his Saturday visit to the Mohammed VI Institute, a school of learning for imams that are exponents of a softer version of Islam.

In February, Francis visited the United Arab Emirates, where he and the imam of Cairo's Al Azhar university signed a landmark joint statement emphasizing the brotherly relation between Catholics and Muslims.

King Mohammed VI backed Pope Francis' efforts to strengthen interreligious harmony and said the only way to combat radicalism is through education.

"What all terrorists have in common is not religion, but rather ignorance of religion," he stressed.

Calls for cohesion in Jerusalem

Together they released a joint statement saying Jerusalem should be a "symbol of peaceful coexistence" for Christians, Jews and Muslims.

They said Jerusalem was "common patrimony of humanity and especially the followers of the three monotheistic religions."

"The specific multi-religious character, the spiritual dimension and the particular cultural identity of Jerusalem... must be protected and promoted."

Pope warns against sin of hostility to migrants

Pope Francis has called hostility aimed at migrants and refugees a sin, urging communities not to yield to fear of the other. The pontiff delivered his message at a special Mass for asylum seekers, refugees and migrants. (14.01.2018)