Sheikh Mohammed bin Rashid al Maktoum has announced a plan to land a spacecraft on the moon and study its surface by 2024. The mission would be the third phase of a much more ambitious space program for the Arab nation. 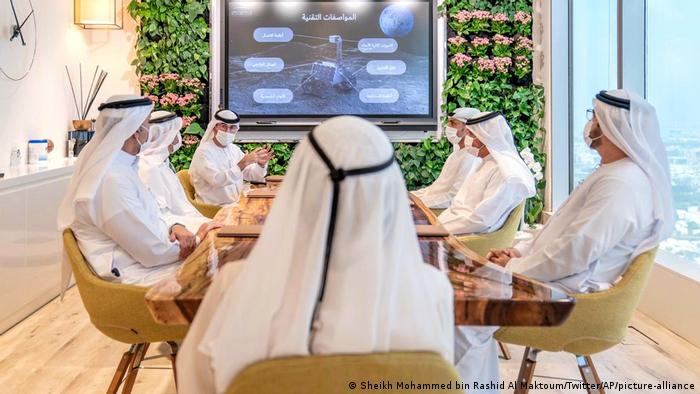 The United Arab Emirates announced a new project on Tuesday to land an unmanned spacecraft on the moon by 2024.

The ruler of the Emirate of Dubai, Sheikh Mohammed bin Rashid al Maktoum, announced the "first-ever Arab mission to the moon", writing on Twitter that the lunar rover "will send back images and data from new sites of the moon that haven't been explored by previous lunar missions."

If the planned lunar mission is a success, then the UAE will be the fourth ever nation to land a vessel on the moon, following the US, the Soviet Union and China.

Sheikh Mohammed also announced on Twitter that the probe would be "100% manufactured and developed in the UAE by Emirati engineers."

The government later told Associated Press news agency that the rover's mission would be to study the surface of the moon and how different surfaces interact with lunar particles.

In September 2019 the oil-rich country sent the first Emirati into space on board a Soyuz rocket which took off from Kazakhstan. The three-member crew stayed in space for eight days.

In July 2020, the UAE set another first by being the first Arab nation to take part in an interplanetary mission when it sent the 'Hope' probe to mars. The unmanned spacecraft was launched from the Tanegashima Space Center in Japan.

The probe is set to arrive at the red planet in February 2021 where it will spend two years in orbit in order to research the planet's atmosphere and changing seasons.

Mitsubishi Heavy Industries, which launched the Mars probe, said nothing had been decided regarding the lunar rover launch and refused to comment when contacted by AP.

According to the Dubai Media Office, the 10 kilogram (22 pound) lunar rover would play a key role in the ambitious longer term project to build a human settlement on Mars by 2117.

The mission was named 'Rashid' after the Sheikh's late father who was a founding leader of the United Arab Emirates, a federation of seven sheikhdoms, including Abu Dhabi and Dubai, among others.